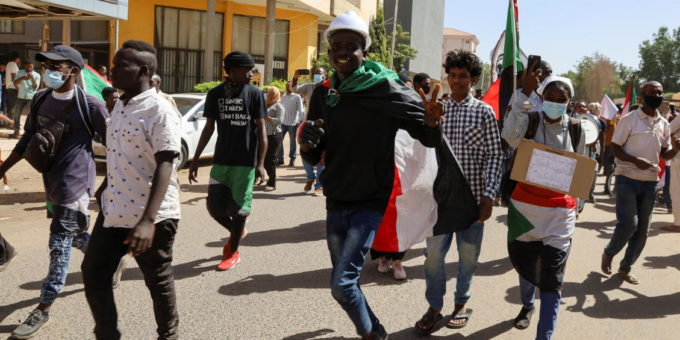 KHARTOUM: Sudanese security agents on Wednesday arrested two leading figures including an ex-minister from the opposition Forces for Freedom and Change (FFC), the civilian group driving protests against last year’s military coup.
The men are the latest in a long line of activists detained since the October 25 military takeover led by army chief Abdel Fattah Al-Burhan, in which the civilian leadership and FFC figures were ousted.
Plain-clothed officers arrested Khaled Omar Youssef, a former minister of cabinet affairs, during a meeting of the FFC bloc at the headquarters of the Sudanese Congress Party, senior member Mohamed Hassan Arabi said.
Officers said they were affiliated with a police station in Khartoum without elaborating, Arabi added.
Also arrested was Wagdi Saleh, a leading figure of the protest movement and an FFC spokesman, according to FFC leader Omar Al-Degeir.
The reasons for their arrest were not immediately clear.
The arrests come a day after the two men joined an FFC delegation for talks with UN special representative Volker Perthes, as part of efforts launched last month hoped to resolve the deepening crisis.
Leading FFC figure Yasser Arman said the latest arrests “will affect the UN process.”
Youssef and Saleh were among the figures who were detained immediately after the coup, before they were released weeks later.
Since the coup, the authorities have launched a deadly crackdown on regular mass anti-coup protests, leaving at least 79 people killed and hundreds wounded, according to independent medics.
The October military power grab, the latest coup in Sudan since the independence, has sparked wide international condemnation and punitive measures.
The United States, which suspended $700 million in assistance, has warned there would be “consequences” if a crackdown by the authorities continues.
“Arbitrary arrests and detention of political figures, civil society activists and journalists undermine efforts to resolve Sudan’s political crisis,” Lucy Tamlyn, the US charge d’affaires in Sudan, wrote on Twitter late Wednesday.
The BBC said three of its reporters were also briefly arrested on Monday while covering anti-coup protests in Khartoum, but the trio were released later that day.
Multiple journalists have been targeted while covering the protests.