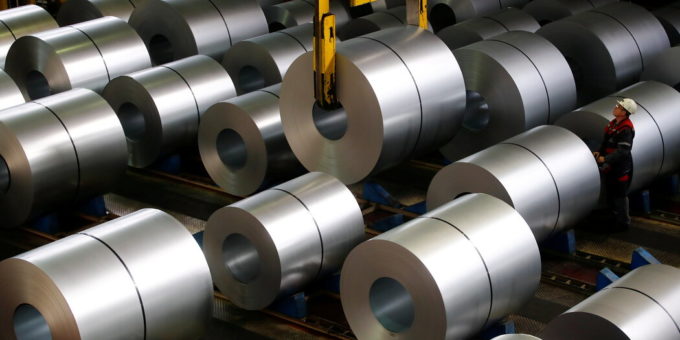 Stocks on Wall Street were set to slump on Monday morning as indexes across Europe tumbled amid a string of concerns for investors — including the troubled Chinese property giant Evergrande, soaring energy prices in Europe and questions over how the Federal Reserve will manage its exit from its large bond-buying program.

The S&P 500 was set to open 1.1 percent lower on Monday, futures indicated. The S&P has dropped for two consecutive weeks, and is down more than 2 percent since it hit a record on Sept. 2. Futures on the Nasdaq composite were down 1 percent.

The Hang Seng in Hong Kong dropped 3.3 percent, to its lowest in nearly a year. Most other Asian markets were closed for a holiday.

Investors pushed the Hong Kong-listed shares of some of China’s biggest property developers deep into the red amid worries that Evergrande’s spiraling debt woes could spill over, affecting the funding abilities of other developers at a time of heightened regulatory scrutiny. Hong Kong shares of the Chinese developer Sinic Holding fell by 87 percent after regulators in one Chinese province said they would punish certain sales practices by developers.

In commodities markets, high natural gas prices in Europe are sending energy bills soaring and causing factories, such as those that make fertilizer, to shut down in Britain. And the price of iron ore, the main raw material in steel, has dropped, sending the stocks of mining companies sharply lower. For example, shares of Anglo American fell 7.9 percent and Glencore shares were down more than 5 percent.

This week, more than a dozen central banks, including those in Japan, Britain and Switzerland, will meet and set policy.

But most traders are likely to be focusing on the Federal Reserve, which is expected on Wednesday to discuss a timeline for when it will begin slowing bond purchases that are aimed at shoring up the economy. Some economists expect the Fed to signal that it will start winding down the bond purchases later this year. The central bank could then begin to raise interest rates the following year.

The Fed will also update its forecasts for economic growth and inflation.

Investors in the United States will have few other data points to guide them this week. The National Association of Realtors will publish data on home sales activity on Wednesday. Sales of existing homes are expected to have fallen slightly in July, economists surveyed by Bloomberg forecast, after two months of gains.

On Tuesday, investors will also be watching FedEx’s quarterly financial report for the three months ending August, as supply chain problems could hamper the company’s revenue. General Mills is set to publish its quarterly earnings report on Wednesday.

While the Delta variant of the coronavirus has delayed plans by many U.S. companies to bring employees back to offices en masse, New York City workers who have been trickling into Midtown Manhattan are discovering that many of their favorite haunts for a quick cup of coffee and a muffin in the morning or sandwich or salad at lunchtime have disappeared. A number of those that are open are operating at reduced hours or with limited menus.

By the end of 2020, the number of chain stores in Manhattan — everything from drugstores to clothing retailers to restaurants — had fallen by more than 17 percent from 2019, according to the Center for an Urban Future, a nonprofit research and policy organization.

Starbucks has permanently closed 44 outlets in Manhattan since March of last year. Pret a Manger has reopened only half of the 60 locations it had in New York City before the pandemic. Numerous delicatessens, independent restaurants and smaller local chains have gone dark.

But in a city where one person’s downturn is someone else’s opportunity, some restaurant chains are taking advantage of the record-low retail rents to set up shop or expand their presence in New York City.

Shake Shack and Popeyes Louisiana Kitchen were among those signing new rental agreements this year. The burger chain Sonic signed a lease for its first New York City outpost. The Philippines-based chicken joint Jollibee, which enjoys a committed following, plans to open a huge flagship restaurant in Times Square.

Lanson Jones, an avid tennis player in Houston, did not want to spoil his streak of good health during the pandemic by getting a vaccine.

Then he contracted Covid. Still, he chose not to get vaccinated. Instead, he turned to another kind of treatment: monoclonal antibodies, a year-old, laboratory-created medicine no less experimental than the vaccine.

In a glass-walled enclosure at Houston Methodist Hospital this month, Mr. Jones, 65, became one of more than a million Covid patients, including Donald J. Trump and Joe Rogan, to receive an antibody infusion.

The federal government covers the cost of the treatment, currently about $2,100 per dose, and has told states to expect scaled-back shipments because of the looming shortages. Seven Southern states account for 70 percent of orders.

Amid the din of antivaccine falsehoods circulating in the United States, monoclonal antibodies have become the rare coronavirus medicine to achieve near-universal acceptance. Championed by mainstream doctors and conservative radio hosts alike, the infusions have kept the country’s death toll — nearly 2,000 per day and climbing at a rapid rate — from soaring even higher.

“The people you love, you trust, nobody said anything negative about it,” Mr. Jones said of the antibody treatment. “And I’ve heard nothing but negative things about the side effects of the vaccine and how quickly it was developed.”

But the treatment’s popularity is straining the U.S. healthcare system.

The infusions take about an hour and a half, including monitoring afterward, and require constant attention from nurses at a time when hard-hit states often cannot spare them.

“It’s clogging up resources, it’s hard to give, and a vaccine is $20 and could prevent almost all of that,” said Dr. Christian Ramers, an infectious disease specialist and the chief of population health at Family Health Centers of San Diego, a community-based provider. Pushing antibodies while playing down vaccines, he said, was “like investing in car insurance without investing in brakes.”

The largest U.S. accounting firms have perfected a remarkably effective behind-the-scenes system to promote their interests in Washington, Jesse Drucker and Danny Hakim report in The New York Times.

Their tax lawyers take senior jobs at the Treasury Department, where they write policies that are frequently favorable to their former corporate clients, often with the expectation that they will soon return to their old employers. The firms welcome them back with loftier titles and higher pay, according to public records reviewed by The Times and interviews with current and former government and industry officials.

From their government posts, many of the industry veterans approved loopholes long exploited by their former firms, gave tax breaks to former clients and rolled back efforts to rein in tax shelters — with enormous impact.

Even some former industry veterans said they viewed this so-called revolving door as a big part of the reason that tax policy had become so skewed in favor of the wealthy, at the expense of just about everyone else. President Biden and congressional Democrats are seeking to overhaul parts of the tax code that overwhelmingly benefit the richest Americans.

This revolving door, with people cycling between the public and private sectors, is nothing new. But the ability of the world’s largest accounting firms to embed their top lawyers inside the government’s most important tax-policy jobs has largely escaped public scrutiny.

“Lawyers who come from the private sector need to learn who their new client is, and it’s not their former clients. It’s the American public,” said Stephen Shay, a retired tax partner at Ropes & Gray who served in the Treasury during the Reagan and Obama administrations. “A certain percentage of people never make that switch. It’s really hard to make that switch when you know where you are going back in two years, and it’s to your old clients. The incentives are bad.”

Sekhar Kammula: You will see a completely new Naga Chaitanya in Love Story