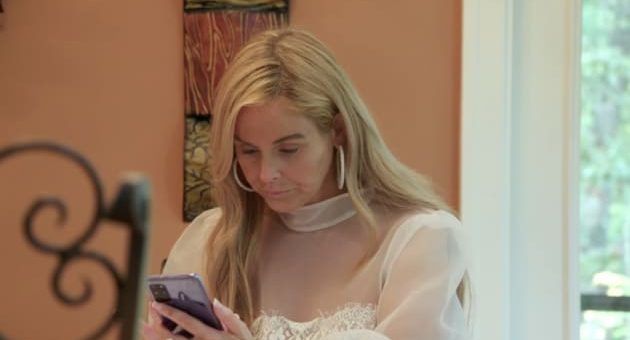 
Unfortunately, her own experience with the show was much less enjoyable.


Stephanie accuses production of ruining her health, refusing to pay what she is owed, and pressuring her to film after as sexual assault.


Now, she says, she is suing the show … and wishes that she had never even heard of 90 Day Fiance.


“My new motto after this reality tv stuff…..ONLY believe half of what you see and hear!!” Stephanie Davison quipped on Instagram in a somewhat random comments section.


It was her hashtags that then caught people’s attention, as she began by writing: “#theycangof–kthemselves #paymewhatyouoweme.”


“These clusterf–ks that work for this company are going to wish they never deceived me,” Stephanie announced when encouraged to clarify.


“I not only was raped while filming,” she revealed to the horror of fans.


“But,” she accused, “manipulated to keep filming” by production.


“After I begged to get off set after being bitten hundreds of times by sandflies,” Stephanie wrote, referring to blood-sucking insects.


“But no,” she lamented, “they just needed a romantic dinner filmed with Ryan.”


“I have spent my time in a hospital now hooked to IV’s for the inflammation from the allergic reactions I had,” Stephanie shared. That sounds horrible.


Stephanie continued by alleging that production had proven “unwilling to pay” her medical expenses incurred while filming.


However, she announced that her “attorney started legal action today.”


Stephanie advised fans to “stay tuned” for more information and what she hopes will be a triumphant outcome to this legal case.


“This show has ruined my health,” Stephanie wrote in a follow-up comment.


That is a huge deal, as Stephanie not only prides herself in taking great care of her body, but owns a company that operates based upon health and rejuvenation.


In conclusion, Stephanie expressed: “I wish I had never heard of this show.”


That is a truly crushing read.


Notably, Stephanie does not share who sexually assaulted her or anything about the circumstances of this.


Our hearts go out to her as she recovers from a vicious, traumatic attack.


We are so sorry to hear that she was allegedly pressured to film after this.


People who have survived sexual assault deserve counseling, justice, and time to process. Add to that allergic bites from blood-sucking insects, and it sounds like a miserable time.


We wish Stephanie the very best and are, again, so sorry about what she has described.


Stephanie has raised eyebrows among the audience for her questionable age gap with Ryan Carr, her semi-fiance.


Ryan seems standoffish at times on the show as he displays unbecoming rudeness to Stephanie.


This isn’t about the gifts that she gives him, the salary that she secretly pays him, or even their relationship — no human being should be spoken to the way that Ryan spoke to Stephanie on the show.


Stephanie has entertained viewers with her daily routine, with her self-administered rejuvenation treatments, and with her antics with her cat, Cooper.


While we still look forward to watching Stephanie’s story play out on camera, fans are of course concerned about what Stephanie has revealed.


Reality TV must operate ethically — just like everyone else.