Breaking News
2022-12-10 FTX’s Sam Bankman-Fried to Testify Before US House Committee Next Week 2022-12-10 Karan Johar on where Bollywood went wrong, “We let go of Salim-Javed brand of cinema and went to Switzerland” : Bollywood News 2022-12-10 Bassil turns to Maronite patriarch for support amid Lebanon stalemate 2022-12-10 Kyrsten Sinema Says She Will Leave the Democratic Party to Become Independent 2022-12-10 Hong Kong: Media mogul Jimmy Lai gets over five years for fraud 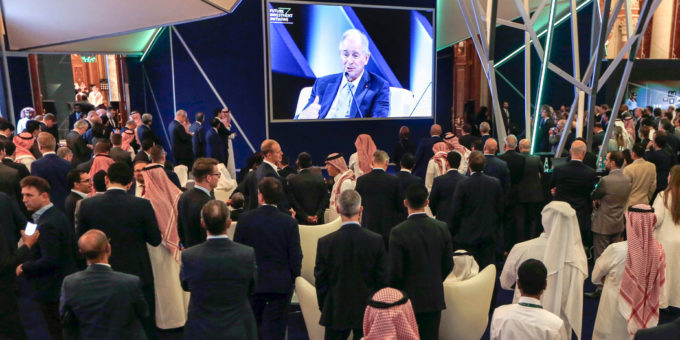 “One of the things we find exciting is there is not much linear connectivity,” Mr. Giegel said. Along with Mr. Branson’s Virgin Group, DP World, a transport company based in the United Arab Emirates, is another major backer.

Many of the people attending the conference this year are venture capitalists and money managers, hoping to meet new clients and partners and tap sources of new cash. Over a lunch of Arab salads, shrimp and smoked salmon, a group of these financiers said they were mainly here to network.

The Public Investment Fund, which is Saudi Arabia’s sovereign wealth fund, took careful measures to avoid backlash this year, keeping the conference agenda off its website until the last minute so that speakers would not be made public and scared off.

Some of those who did reverse course and attend this year drew criticism for doing so.

The former World Bank president, Jim Yong Kim, withdrew from attending in 2018 but his successor, David Malpass, participated in a panel on Tuesday. That struck some in the development world as a curious decision.

“I’m not sure what has changed since last year when the World Bank and the world community said we are not gong to be a party to corruption, harassment of dissidents and to extrajudicial killings,” said Paul Cadario, a former World Bank senior manager and fellow at the University of Toronto’s Munk School.

Some attendees defended the kingdom. Franck Petitgas, head of international operations at Morgan Stanley, suggested in an interview on the sidelines of the conference that the media was being tougher on Saudi Arabia than on other authoritarian countries like China, possibly because it was easy to focus criticism on a single figure, the crown prince.