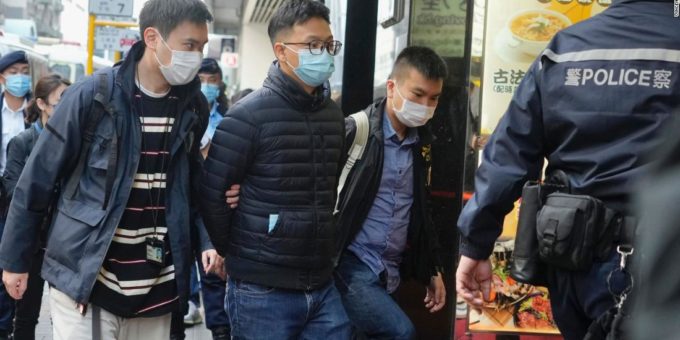 The independent news website announced on its Facebook page that it has ceased operations and dismissed all employees, effective immediately. The statement said that Stand News will immediately stop updating its website and social media accounts, which will be removed within days.

At a news conference Wednesday afternoon, Steve Li Kwai-wah, senior superintendent of the Hong Kong police’s National Security Department, said that the arrests were connected to multiple “seditious” articles published by the outlet between July 2020 and November 2021.

Li also said that police raided the news outlet’s office in the city’s Kwun Tong area, and froze about 61 million Hong Kong dollars ($7.8 million) worth of assets from the company.

Some 200 police officers were involved in the newsroom raid, where they seized journalistic materials, according to a government statement earlier Wednesday.

While an initial government notice released Wednesday referenced a “conspiracy to publish seditious publications” — allegations that stem from a colonial-era crimes ordinance — the police involved with the Stand News case are national security officers.

A turbulent year for the press

The arrests come at the end of a turbulent year for press freedoms in Hong Kong, which dubs itself “Asia’s World City” and once prided itself on being the region’s preeminent international media hub.

The city’s once vibrant media landscape has withered since Beijing imposed a sweeping National Security Law on the city in 2020, which led to the shuttering of the fiercely outspoken pro-democracy outlet Apple Daily earlier this year.

“The Hong Kong Journalists Association is deeply concerned that the police have repeatedly arrested senior members of the media and searched the offices of news organizations containing large quantities of journalistic materials within a year,” the HKJA said in a statement Wednesday, adding that it urged the government to “to protect press freedom in accordance with the Basic Law,” the city’s de facto constitution since 1997.

Ronson Chan Ron-sing, the deputy assignment editor of Stand News and the chairman of HKJA, was also “taken away by the police,” according to the association.

Stand News had posted a video of police arriving at Chan’s home for a raid earlier on Wednesday morning. Chan later told local media in Hong Kong that he had not been arrested.

Ho, the Cantonese pop star and prominent pro-democracy activist, was arrested at her home at 6 a.m. Wednesday, according to her assistant, who asked not to be named.

Police spent over two hours at the singer’s home and seized phones and computers as well as her ID card and passport, her assistant told CNN Business.

At the Stand News office on Wednesday, police gathered about 30 boxes of “evidence,” a press officer for the police at the site told CNN Business.

“Anybody who attempts to make use of media work as a tool to pursue their political purpose or other interest contravenes the law, particularly offenses that endanger national security,” Hong Kong Chief Secretary John Lee said when asked by reporters about the arrests at an unrelated press event.

“They are the evil elements that damage press freedom. Professional media workers should recognize that these are the bad apples who are abusing their position simply by wearing a false coat of media worker,” Lee added.

‘The stakes are high’

The HKJA has continued to speak out in defense of press freedom, despite facing criticism from Hong Kong officials and Chinese state media.

The latest police actions came hours after the HKJA hosted its annual dinner on Tuesday, which had been delayed for more than a year due to coronavirus restrictions.

“We know that the stakes are high, but press freedom has been the backbone of Hong Kong’s success,” Chan said in a speech at the dinner. “Hong Kong will always need the truth as well as journalists. No matter how difficult the road ahead will be, the association will strive to never fail.”

Founded after student-led demonstrations in Hong Kong in 2014, Stand News rose to prominence during the city’s pro-democracy protests in 2019 with its breaking news coverage and critical editorials and opinion pieces.

It was considered to be among the city’s most outspoken outlets, often publishing hard-hitting reports — even after the enactment of the National Security Law.

It is the second independent media outlet targeted by national security officers, after Apple Daily, which was shut down in June after hundreds of police officers raided its office, arrested executives and froze its assets under national security charges.

The raids on Stand News also come one day after jailed Apple Daily founder Jimmy Lai was hit with a charge of conspiracy to print, publish and distribute seditious publications, the same charge as what authorities are now accusing the Stand News affiliates of.

Lai was sentenced to 13 months in prison this month for inciting and participating in the city’s annual candlelight vigil to commemorate the Tiananmen Square crackdown last year. Authorities had declared that assembly illegal, owing to coronavirus restrictions. Lai was already serving time in prison for other charges.

A ‘shockwave through Hong Kong’

Speaking at the HKJA’s annual dinner Tuesday, Chan described the arrest of Lai and his colleagues and the subsequent shuttering of the Apple Daily as a “shockwave throughout Hong Kong” which “had a big impact on news workers who are still struggling in the frontline every day.”

Chan also acknowledged the increasing difficulty for the HKJA to fill the positions at its executive committee, due to concerns about their personal safety and career prospects.

“In fact, the position of vice-chairperson is still vacant and will remain so until November. It shows that many colleagues perceive that becoming an HKJA executive committee member could make one’s life precarious,” Chan said.

In a statement Wednesday, the Foreign Correspondents’ Club in Hong Kong said it was “deeply concerned” over the arrests associated with Stand News.

“These actions are a further blow to press freedom in Hong Kong and will continue to chill the media environment in the city following a difficult year for the city’s news outlets,” it said.

The National Security Law, which was drafted in Beijing and promulgated in Hong Kong last year, criminalized acts of secession, subversion, terrorism, and collusion with foreign forces to endanger national security — with a maximum sentence of life imprisonment for all four.

Since the law’s enactment, the city’s pro-democracy camp has been virtually wiped out, with prominent figures either in jail or in exile overseas. A series of civil groups have disbanded, and more recently, several universities have removed statues promoting democracy or commemorating the Tiananmen Square massacre overnight, sparking concerns about freedoms on campuses.

The Hong Kong government has repeatedly denied criticism that the law has stifled freedoms, claiming instead that it has restored order in the city after the 2019 protest movement.