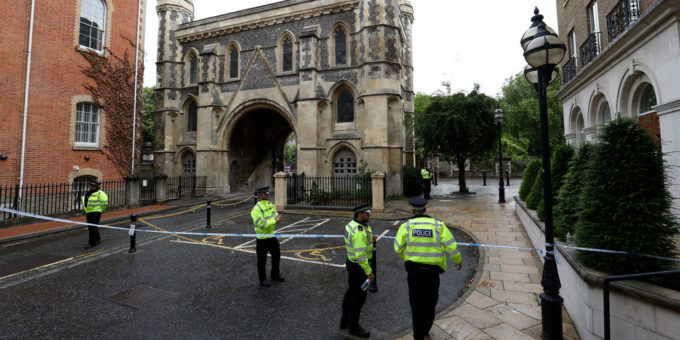 LONDON — A stabbing attack at a park in southern England that left three people dead on Saturday is being investigated as a “terrorist incident,” police officials said Sunday.

The attack happened around 7 p.m. at Forbury Gardens in the town of Reading, the Thames Valley Police said. A Black Lives Matter protest had been held there earlier in the day, though the police said earlier that the stabbings were not connected to the demonstration.

Three people were killed in the attack and three more were seriously injured, the police said. A 25-year-old man was arrested at the scene on suspicion of murder on Saturday and remained in custody on Sunday.

“Incidents of this nature are very rare, though I know that will be of little comfort to those involved and understand the concern that this incident will have caused amongst our local community,” Chief Constable John Campbell said in a statement on Sunday.

The Thames Valley Police said that counterterrorism units would be taking over the investigation.

Britain’s Counter Terrorism Policing said in a statement on Sunday that there was nothing to suggest that other people were involved. Neil Basu, who heads the group and is an assistant commissioner of the Metropolitan Police, said that “the motivation for this heinous act is far from certain.”

The suspect, whose name was not released, was originally from Libya, according to an official who spoke on the condition of anonymity because of the continuing investigation. British news media, citing unnamed government sources, reported that the security services looked into him last year, based on a suspicion of planning terrorism abroad, but found no evidence that he posed a threat.

Britain has seen a string of attacks in the last few years that were classified as terrorism, several of them deadly.

The worst took place in 2017, when a suicide bomber linked to the Islamic State group, or ISIS, killed 22 others and wounded more than 100 people leaving an Ariana Grande concert in Manchester. Less than two weeks later, three attackers inspired by ISIS killed eight people, driving a van into pedestrians on London Bridge and then stabbing people in a nearby market, before being killed by police officers. Last November, a man with ties to Islamist terrorist groups fatally stabbed two people and wounded three others, and was killed by the police on London Bridge.

Until Saturday, Reading had not suffered a terrorist attack since 1993, when an Irish Republican Army bomb exploded near the railway station but hurt no one.

“Understandably, a great many people are shocked, appalled, uncertain,” said Jason Brock, the leader of the Reading Council. “Some are angry, of course. I’d say I feel all of those things as well.”

But he said that, in a town that took pride in its diversity, it was important that people not allow the incident to divide them.

In an interview on Sky News on Sunday, Prime Minister Boris Johnson on Sunday praised the police for their bravery and said he was “appalled and sickened” by the assault.

Lawrence Wort, a 20-year-old personal trainer who said he was at the park at the time of the attack, described what he experienced in a message on Twitter on Saturday.

“The park was pretty full, a lot of people sat around drinking with friends when one lone person walked through, suddenly shouted some unintelligible words and went round a large group (of about 10 people) trying to stab them,” he said.

He added that the man’s eyes “looked like he was on some sort of drugs” and said that he stabbed three people in the neck and under the arms before turning and running toward Mr. Wort, who said he ran to escape.

The assailant then turned to another group of people who were sitting down, and stabbed one of them in the back of the neck, according to Mr. Wort. When he realized that everyone had started to run, the attacker left the park, he said.

The park that is a regular meeting place for people in Reading, less than 40 miles west of London, looking to get out of the office for lunch or sit in the evenings.

“Especially in the current situation, with Covid restrictions in place, it’d been an increasingly popular place for people to spend time,” Mr. Brock said. “Because it’s so special to all of us in Reading, it makes the experience all the more traumatic for the community and town.”

One of the victims was a teacher from nearby.

Despite early social media posts that said the attack happened during the Black Lives Matter protest, Mr. Wort said that the protest had ended at least three hours before the stabbings.

This claim was also supported by Nieema Hassan, one of the organizers of the Black Lives Matter protest at Forbury Gardens, who said in a video message on Facebook on Saturday that the attack had nothing to do with the protest and that none of the protesters were affected as they had all left the park.

“This evening we saw a senseless attack on people simply enjoying a Saturday evening with family and friends,” the British home secretary, Priti Patel, said in a statement early Sunday. “My heart, prayers and thoughts are with all of those affected and to the people of Reading who will be deeply shocked and concerned by this terrible incident.”