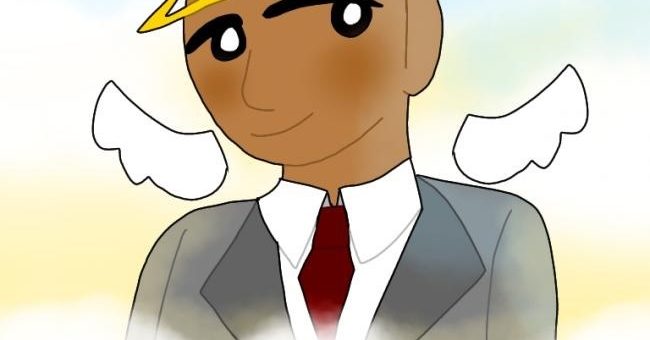 SCORES of people have paid tribute to a “legend” supply teacher who died on Wednesday, including one student who created a piece of art in his memory.

Mo Shaffi was the man who was found unconscious in Serpentine Road, Cleckheaton, on Wednesday morning, and died shortly after, St Bede’s and St Joseph’s Catholic College confirmed on Thursday.

The school added that Mr Shaffi was a “well-respected” and “well-liked” member of their community.

The T&A set up a Book of Condolence for people to pay tribute, on Thursday, January 30.

Since then, more than 70 submissions have been made.

Several included photos and one even had a special piece of art attached (above right).

That was created by Leilani Crosby-McKenna.

It depicted Mr Shaffi as an angel, sat above the clouds, with the caption “Legends never die”.

Leilani said: “Shaffi, dude, you were a real legend – seriously bro, we won’t forget you.

“There’s never been a supply like you and I doubt there ever will be.

“May you ignite, illuminate and shine.”

The appreciation and adoration for Mr Shaffi is widespread, with tributes flooding in from current students, and those who left the school a number of years ago.

James Brankin shared a picture of the supply teacher at a school event around five years ago, wearing a pair of funky shades (main pic).

He said: “This picture was taken nearly 5 years ago now, but it just captures who he was.

“A great man who was well liked and respected by many. R.I.P. Mr Shaffi.”

One unnamed contributor sent in a lengthy tribute, which was filled with emotion.

It said: “R.I.P. Mr Shaffi. I think we’re all in so much shock right now because you were genuinely always so cheerful and funny to be around.

“People underestimated you because you were a supply teacher but at the end of the day, you really did change all of our school experiences and therefore our lives with your lessons.

“There was never a dull moment with you. You will forever be in the hearts and memories of everyone at St Bede’s and St Joseph’s, it’s never going to be the same without you.

“Hope you’re championing it at kickboxing up in heaven. Rest easy sir, we are all genuinely devastated.

“You really did bring a unique light to this school that no one else could.”

Others were in agreement that Mr Shaffi had “made St Bede’s and St Joseph’s what it is today” and that he could always put a smile on people’s faces.

Another said: “We will never forget you and your legacy will live on in our school.”

Police were called at 2.50am on Wednesday to a report of an unconscious man on the pavement.

Paramedics also attended at the scene and the man was pronounced dead a short time later.

The death is being treated as unexplained pending a post mortem examination, but at this time there are no suspicious circumstances.