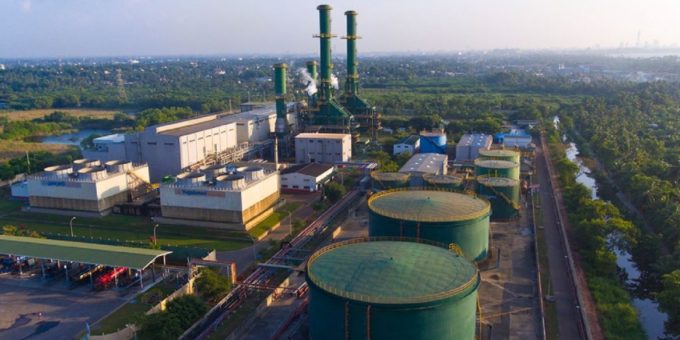 COLOMBO (News 1st); JVP Leader Anura Kumara has alleged that the government has signed a midnight agreement with a US firm for electricity generation and the supply of liquefied natural gas (LNG).

In early July 2021, New Fortress Energy Inc. announced that it has signed a Framework Agreement with the Government of Sri Lanka to construct a new offshore liquefied natural gas (LNG) receiving, storage and regasification terminal.

The Terminal will be located off the coast of Colombo to supply gas to the country’s power plants, primarily located in the Kerawalapitiya Power Complex.

The Kerawalapitiya Power Complex consists of 300 MW in operation today and is ultimately expected to grow to over 1,000 MW by 2025.

As part of the Agreement, New Fortress will supply natural gas to the existing 300 MW Yugadanavi Power Plant and is negotiating the purchase of the Government’s 40% stake in the company that owns the power plant.

This power plant is currently under a long-term power purchase agreement (PPA) to provide electricity to the national grid that extends through 2035. The plant consists of General Electric turbines and was configured to run on natural gas in combined cycle.

Anura Kumara Dissanayake alleged the agreement was already signed in a backdrop where the cabinet paper for this project, was not seen by any cabinet minister, thought it was approved.

‘The agreement was signed at 12:06 AM on Saturday (18). Thereafter the President flew off to the US,” said Dissanayake.

He said the JVP will seek relief from the court against these attempts.

At the same time, opposition lawmaker and Former Minister Dr. Harsha De Silva said there are serious concerns about Sri Lanka’s move towards LNG with US firms involved.

6 daily habits that are killing your metabolism

Boney Kapoor’s domestic help tests positive for COVID-19, says he and his daughters Janhvi and Khushi are not showing any symptoms : Bollywood News
2020-05-19