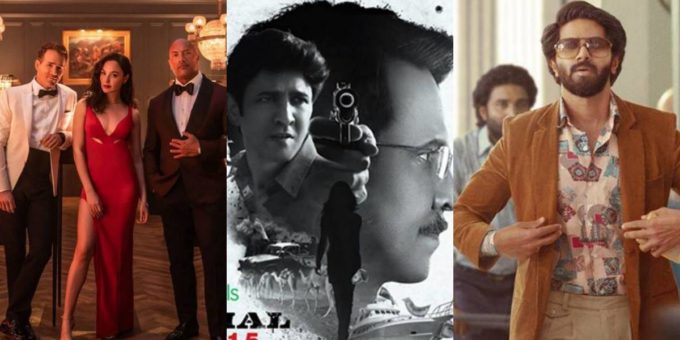 This weekend there’s a multi-language treat for OTT platform enthusiasts and moviegoers. Kay Kay Menon-starrer Special Ops returns on Disney+ Hotstar for its second season. With just four episodes, it is neither a prequel nor a sequel in the strictest sense.

For the moviegoers, Kurup is the highlight of the weekend. One of the most awaited films of the year, it is a film on criminal Sukumara Kurup, with Dulquer Salmaan playing the lead role. It is available in multiple languages.

Upping the oomph factor is Dwayne Johnson, Ryan Reynolds and Gal Gadot in Red Notice, which is available on Netflix.

Special Ops 1.5 is streaming on Disney Plus Hotstar. (Photo: PR)

Disney+ Hotstar show, Special Ops was a hit among the masses when it released on the streaming giant. Now it has returned with a prequel, titled Special Ops 1.5: The Himmat Story. It follows the origin story of how Kay Kay Menon’s Himmat Singh became the legendary R&AW officer. Helmed by Neeraj Pandey, the web show also stars Vinay Pathak, Gautami Kapoor, Aftab Shivdasani, Aadil Khan, Parmeet Sethi, and Kali Prasad Mukherjee. Praising Menon’s Himmat Singh, The Indian Express’ film critic Shubhra Gupta wrote, “He is still his sharp, sardonic self, pushing back at corrupt, incompetent seniors and catching the backs of the people he works with. This quality evokes undying admiration in Abbas Sheikh (Vinay Pathak), diligent cop and faithful collaborator, who picks up the threads, and gives us chapter and verse of his hero’s ascent. The interactions between two are the best part of this season too.”

Adulting Season 3, starring Aisha Ahmed and Yashaswini Dayama has premiered on Amazon miniTV. The series follows the story of two flatmates and best friends, Ray and Nikhat. Like the last two seasons, this time too, the two girls will be managing life amid the hustle and bustle of Mumbai. The new season also has some new additions to its cast as Nikhat unravels her love life, and Ray grows on the professional front. The makers of the slice-of-life show have promised to take the audience ‘through the unique yet relatable depiction of life in an urban jungle.’

The Netflix film Red Notice features Hollywood royalty — Dwayne Johnson, Gal Gadot, and Ryan Reynolds, and these three are enough to grab your attention. Red Notice derives its title from the Interpol alert of the same name. The official synopsis of the film reads, “An Interpol-issued Red Notice is a global alert to hunt and capture the world’s most wanted. But when a daring heist brings together the FBI’s top profiler (Johnson) and two rival criminals (Gadot, Reynolds), there’s no telling what will happen.” The reviews, however, talk about overpromising and underdelivering.

Dulquer Salmaan plays ‘India’s longest wanted fugitive’ Sukumara Kurup in Srinath Rajendran directorial Kurup. The film also stars Sobhita Dhulipala, Indrajith Sukumaran, Shine Tom Chacko, Sunny Wayne and Bharath Niwas. The film tells the tale of a conman who murdered a man named Chacko in 1984, and used the corpse to subsequently fake his death to claim insurance money. Kurup was to release in May 2021. However, due to the Covid-19 second wave and subsequent lockdown, the film was postponed. Upon its release, the film has received mostly positive responses.

Read the review of Kurup here.

The Telugu drama, directed by Sri Saripalli stars Kartikeya Gummakonda, Tanya Ravichandran, Tanikella Bharani and Pasupathy in the lead roles. Kartikeya stars as an undercover agent with a comic sense. For a covert operation, he befriends the daughter of the Home Minister of the state and tries to nab the culprits who seem to be planning something big in the city.

Nivin Pauly’s Kanakam Kaamini Kalaham is the first Malayalam film to have OTT release. Directed by Ratheesh Balakrishnan Poduval, the film also stars Sudheesh, Jaffer Idduki, Joy Mathew, Sivadasan Kannur, Grace Antony and Vinay Forrt. Nivin Pauly’s Pavithran KV is a struggling junior artist in Malayalam cinema. He also runs an acting academy. His wife Haripriya (Grace Antony) is a former junior artiste in Malayalam soaps. Pavithran tries to save his marriage with Haripriya by buying her a pair of gold earrings and they take a vacation to Munnar. What happens between the two at the vacation forms the major plot of the story.

Woh Kaun Thi is also remembered for its melodious music.

Starring Sadhana and Manoj Kumar in lead roles, Woh Kaun Thi? is a horror mystery. It follows the story of Anand, a doctor who believes he is being followed by a ghost, played by Sadhana. His life takes a dramatic turn when he finds out that his new bride Sandhya is actually a ghost. As Anand starts losing his mind, people around him are further intrigued about the identity of the woman who has everyone puzzled. This is one edge of the seat thriller that you can enjoy with your family on weekend.

Are you up for an animated movie? Persepolis, an animated film for adults, is about a young Iranian woman who grows up in a strictly orthodox government. It is based against the backdrop of the Iranian revolution that took place in 1979. Writing about the film in her column, Hollywood Rewind, indianexpress.com’s Anvita Singh wrote, “Persepolis is many things at once, it is a darkly comic film, it is also a historical-political drama and it works greatly as a ‘bildungsroman.’”

Calls mount for Israel to free Palestinians on hunger strike

Complaint filed against Kangana Ranaut for ‘Freedom in 1947 was bheek’ comment : Bollywood News

Rohit Shetty on new release date for Akshay Kumar’s Sooryavanshi – “The question is when will theatres open up?” : Bollywood News
2021-07-09