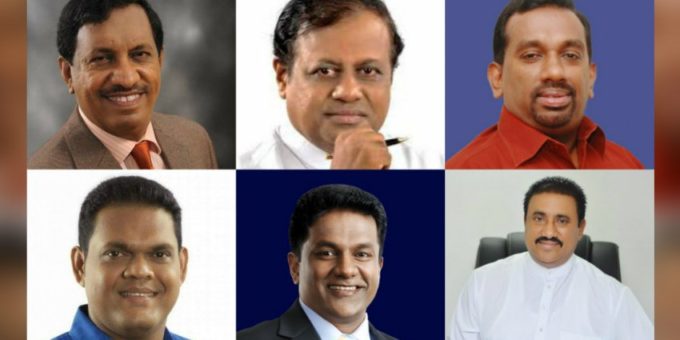 Colombo (News 1st): Several factions expressed their opinion today (June 12) on the Special Parliamentary Committee hearings that are held with the objection of the President and the cabinet meetings not being convened.

UPFA MP Susil Premajayantha said yesterday, the cabinet meeting from the President’s side was not held and from the part of the government, the Special Parliamentary Committee convened. He noted that it is clear that these two factions hold contrasting opinions on this and this is not an ideal method to take the country forward.

MP Mahindananda Aluthgamage said the Speaker is currently attempting to use the legislature as a tool to build up his image and that of the UNP. He stated that there is a law in Parliament, if a matter is being taken up in court, they have no right to talk about it in Parliament.

He said as it is public knowledge, there are currently 5 cases being heard in the Supreme Court, regarding the April 21st attacks and against such a backdrop, the Speaker appointed a committee to discuss these matters in a separate room in Parliament, not even the chamber which holds the mace. He noted, therefore, this goes against all Parliamentary traditions.

Adding to this MP Anura Priyadharshana Yapa noted that it is evident now that the Speaker has involved himself in this issue. He noted the Special Parliamentary Committee is carrying out a wrong act, such acts only diminish the prestige of Parliament. He added that not only has the Speaker destroyed his credibility but also destroyed the prestige of the parliament he heads.

He noted Karu Jayasuriya carried it out well and there was a deal between them if Ranil Wickremesinghe was re-instated as the Prime Minister of the country, he promised to make Karu Jayasuriya the next Presidential candidate from the UNP.

MP Semasinge said as the Speaker acted during the no-confidence vote against Mahinda Rajapakse last year, the Speaker should have carried out a floor vote to decided whether to appoint the Special Parliamentary Committee or not. He said they can see the contrast between how the Speaker conducted no-confidence votes back then and now.

The parliamentarian said back then, the minute Parliament convened, he suspended all standing orders and took a vote within 5 minutes against the Prime Minister. He said the Speaker bears equal responsibility for the dire situation of the country. In the future when independent hearings are held regarding these wrongdoings, such people will be revealed.

UPFA MP Thilanga Sumathipala noted that the speaker is aware, as long as he has the support of the TNA and the Muslim community he has a majority, therefore he is acting to ensure the confidence of those people. The MP noted that politically he is acting based on the needs of the UNP and doing things in this manner in the Parliamentary special committee.

“What His Excellency President Maithripala Sirisena said was, attack me as much as you want, sling mud at me, but do not use me and while I am being attacked do not play with the national security. If there is a government employee under me, and if that person is summoned to testify, the whole world will know how our intelligence community works.”

The parliamentarian noted that the president had made a reasonable request not to carry out this grave sin and from what is seen, the speaker is of the stance that it is good that mud is being slung at the President, he invites the media and allows this to be telecast and acts as if slinging mud at the president is better than protecting national security.

Making a statement regarding the matter UPFA MP Rohitha Abeygunawardana noted that on the 22nd of September 2017, when a 2/3rds majority was required to amend the method of conducting the provincial council elections, the Speaker was supposed to conduct the vote at 6 pm, however, he dragged it till 10 pm.

MP Abeygunawardana notes the Speaker dragged the Parliamentary sessions until they were able to bring all of the UNP MPs, some were brought even using helicopters and once everyone arrived around 10 pm, they passed the vote and the provincial council elections have still not been held.

He states that to this day, Provincial Councils have not been held because of that sin they committed back then, subsequently, when the change in Government occurred, the Speaker conducted no-confidence votes, as soon as they were handed to him.

The Parliamentarian went onto note that the speaker was surrounded by the Police, and was sitting on the floor, they did not even see him and he was hiding in a corner and passing various motions. He said this is the same Speaker, therefore, they requested the speaker not to mix things up.

MP S. B. Dissanayake noted that he personally feels the judiciary and the Parliament can take legal action against the past acts of the Speaker, someday in the future, therefore, the government should focus its attention of carrying out legal activities against him.

Kanika Kapoor gets notice from Lucknow police to record statement amid her covid-19 recovery : Bollywood News
2020-04-28