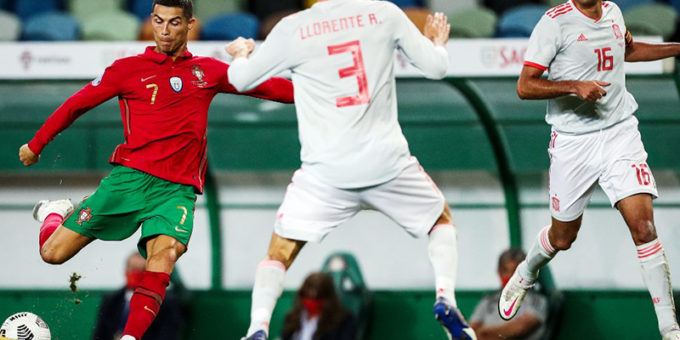 Spain’s head coach Luis Enrique believes his side were the ‘better team’ on the night in a 0-0 draw against Portugal.

Juventus’ star forward Cristiano Ronaldo hit the crossbar as
both teams played out a goalless draw in a compelling friendly in Lisbon on
Wednesday.

Ronaldo and Renato Sanchez both struck the woodwork for
Portugal, who then should have won it in injury-time only for Joao Felix to
miskick at the back post.

However, Enrique while talking to the media after the match,
said that his team was the better one on the night despite not having any
clear-cut chances.

“I think we were better than Portugal,” said Spain
coach Luis Enrique. “We dominated the game. For sure they had two shots on
the break that hit the bar and one that Kepa saved but we had chances as
well.”

Both sit top of their Nations League groups, Portugal with
maximum points after beating Croatia and Sweden while Spain have four after
thrashing Ukraine and drawing with Germany.

Spain go up against Switzerland on Saturday before playing
against Ukraine three days later whereas Portugal face world champions France
on Sunday and then play at home to Sweden.

15 Things Every Woman Must Do After 25 to Stay Youthful