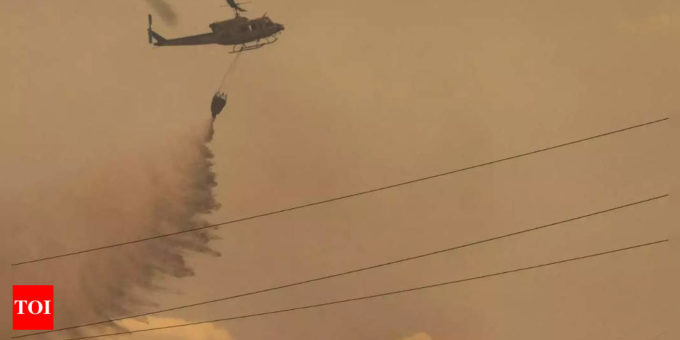 MADRID: Firefighting crews in southern Spain are looking at the sky for much-needed rainfall expected on Monday and that they hope can help extinguish a major wildfire that has ravaged 7,700 hectares (19,000 acres) in five days and displaced around 2,600 people from their homes.
Authorities are describing the blaze in Sierra Bermeja, a mountain range in the Malaga province, as a sixth-generation fire of the extreme kind brought by the shifting climate on the planet. The “mega-fires” are catastrophic events that kill, blacken large areas, and are difficult to stop.
In Spain, that is paired with an increasing dynamic of rural areas losing population, leading to poorer management of forests and accumulation of burnable material.
“We are facing the most complex fire known by the forestry extinction services in recent years,” Juan Sanchez, director of the southern Andalusia region’s anti-fire service, told reporters late Sunday.
“We have been talking a lot about the consequences of the abandonment of the rural environment and climate change,” Sanchez added. “We are seeing them today.”
The affected area has doubled since Saturday when authorities said that the flames were contained within a perimeter of around 40 kilometers (25 miles). An ember cloud led to a new fire hot spot soon after, causing a new wildfire that eventually joined the previous blaze, experts said Sunday. By Monday morning, the perimeter had reached 85 kilometers (about 50 miles).
Spain’s weather agency, AEMET, had forecasted rain in the area for later Monday, but it was unclear if the rainfall would be sufficient to quell the flames.
About 500 firefighters were working in shifts on the ground, assisted by 50 water-dropping airplanes and helicopters from the air. They were joined on Sunday by 260 members of a military emergency unit. A 44-year-old firefighter died Thursday while trying to extinguish the blaze.
Around 2,600 residents have been relocated in total. Most of those evacuated from parts of the resort town of Estepona had been able to return home by Monday, but 1,700 people remained displaced from six villages and hosted in other towns, including in a pavilion in the city of Ronda.
Climate scientists say there is little doubt that climate change from the burning of coal, oil, and natural gas is driving more extreme events, such as heatwaves, droughts, wildfires, floods, and storms.
In Spain, official data showed that the country had experienced fewer fires so far this year than the average during the past decade, but the number of big forest fires – those affecting more than 500 hectares (1,200 acres) – was 19 in the first eight months of 2021 compared to 14 on average for the same period since 2011.
That has also led to a greater bush and forest area burned: 75,000 hectares (186,000 acres) as of Sept. 5, compared to an average of 71,000 hectares on average in the previous years, data from the ministry of ecological transition showed.

Afghan women hit back at Taliban with #DoNotTouchMyClothes campaign