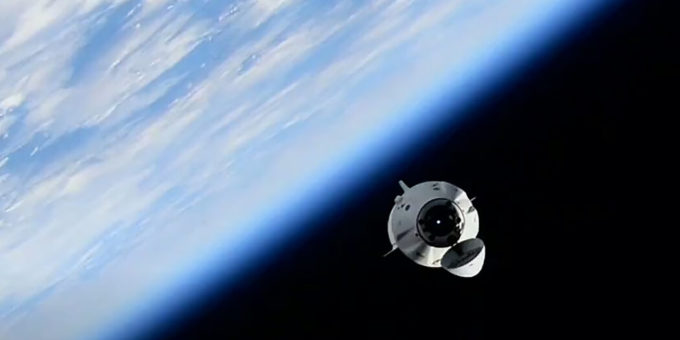 The four astronauts have been resting and eating snacks since leaving the space station’s vicinity around 4 p.m. Eastern time. They’re about to get back in their SpaceX-made flight suits ahead of a pivotal, automated maneuver toward Earth’s atmosphere.

When the Crew-2 astronauts depart on Monday, only a single crew of three astronauts remains on the space station — one American and two Russians. It’s a small head count for the orbital lab, which has had as many as 13 astronauts aboard at once, but usually has seven crew aboard these days.

Mark Vande Hei, a NASA astronaut, and two Russian astronauts, Anton Shkaplerov and Pyotr Dubrov, will hold down the fort for at least four days until four more astronauts from NASA and SpaceX’s Crew-3 mission arrive on Thursday at 7:10 p.m. Eastern time.

The last time the space station held just three astronauts — also an American and two Russians — was in April 2020 as NASA was weaning off its dependence on Russia’s Soyuz rocket for flights to the orbital lab. One month later, SpaceX launched its first group of NASA astronauts to space, Bob Behnken and Doug Hurley, marking the first crewed flight from American soil in nearly a decade.

This time around, NASA tried avoiding the brief three-person crew scenario by launching the Crew-3 astronauts before Crew-2 departed, ensuring a clean handover on the space station between the two crews. But bad weather delayed Crew-3’s launch, initially scheduled for Halloween. Then a “minor medical issue” with one of the Crew-3 astronauts triggered another delay. NASA ultimately decided to shift its attention to returning Crew-2 while the astronaut’s medical issue subsided.

Agency officials said the medical issue was unrelated to Covid-19 but did not elaborate further or identify the astronaut affected, only saying on Saturday that they expect it to clear up before Crew-3’s Wednesday launch.

A three-person crew with just one American isn’t ideal for space station operations. With no backup American astronaut, it jeopardizes a continuous U.S. presence on the space station, a NASA safety panel warned last year. It also makes it difficult to maintain the space station if the short-handed crew lasts for long periods of time. Spacewalks to swap out some batteries on the station’s exterior were rescheduled during the 2020 lull until more astronauts arrived.

Mr. Vande Hei and Mr. Dubrov have been on the station since April, when they launched on a Russian Soyuz rocket with a third Russian, who returned to Earth in a different spacecraft last month. In September, Mr. Vande Hei’s six-month mission on the space station was extended to 353 days with a departure date in March 2022, putting him on track to set a record for the longest spaceflight by an American astronaut (Scott Kelly, a retired NASA astronaut, spent 340 days in space during a mission that ended in 2016).

“It was definitely helpful to have Mark Vande Hei staying” on the space station, Joel Montalbano, NASA’s space station manager, told reporters on Saturday during a news conference about the updated Crew-2 schedule.

He said NASA’s efforts to secure an agreement with Russia’s space agency to trade astronaut seats between Crew Dragon and Soyuz spacecraft will eventually help avoid scenarios when the station is down to three occupants. Those talks have been stalled for years, but American and Russian officials last month indicated progress was being made toward a first joint flight on Crew Dragon sometime next year.

While there will only be three people on the International Space Station after Crew-2 leaves, there will be three other people in orbit. China’s Tiangong space station, which is under construction, is currently home to three astronauts, its second crew since it reached orbit earlier this year.

After Crew Dragon undocked from the space station on Monday, it began a roughly eight-hour trip back to Earth. The capsule, traveling at about 17,000 miles per hour, has been orbiting Earth as it uses a set of small onboard thrusters to dip itself lower toward the atmosphere.

The action starts on Monday night, roughly an hour before splashdown, when Crew Dragon will begin to skim the edge of Earth and space and fire its onboard thrusters for about 10 minutes. Then it will make its decisive plunge into the atmosphere, the riskiest part of any mission besides launch. The process is fully autonomous; the astronauts stay in the seats for what past crews have described as a jarring, turbulent ride.

During this stage of the trip, which is called atmospheric re-entry, Crew Dragon’s outer shell will hit temperatures of up to 3,500 degrees Fahrenheit. The astronauts inside will stay cool with the help of an air conditioning system. A sheath of plasma will form around the speeding capsule and cut off communications with ground control for a few minutes before the spacecraft slows to descent speeds of about 350 miles per hour.

Then, effectively slamming on the brakes, a set of two parachutes will deploy to slow the capsule further, jolting the crew inside. Small explosive devices will detach those parachutes just before another set of four bigger chutes unfurl, reducing the capsule’s speed to roughly 15 miles per hour.

The capsule is expected to splashdown off the coast of Pensacola, Fla., in the Gulf of Mexico at around 10:33 p.m. The crew’s return had been delayed several times over bad weather, but for Monday night, “the weather right now at Pensacola is looking fantastic,” said Gary Jordan, a NASA spokesman, of the forecasts.

Four astronauts from NASA’s Crew-2 mission left the International Space Station on Monday. They donned their spacesuits, buckled into a Crew Dragon capsule built by SpaceX and then undocked from the space station at 2:05 p.m. Eastern time on Monday.

The return trip will last just over eight hours in total, with the water landing of the capsule, which is nicknamed Endeavour, expected at roughly 10:33 p.m. Eastern time on Monday.

NASA has been streaming live coverage of the journey that will continue until shortly after the capsule’s splashdown.

Shortly before undocking, NASA and SpaceX chose an area near Pensacola, Fla., for Crew Dragon’s splashdown zone. It is one of seven different locations in the waters around the Florida peninsula where the capsule can land, and NASA picks whichever area has the most favorable weather. Clear skies, calm seas and gentle winds are prime conditions for a space taxi splashdown.

Since astronauts started flying in the SpaceX capsule in May 2020, two crews have landed in the Gulf of Mexico near the Florida Panhandle. A third returned in the Atlantic Ocean near Kennedy Space Center in Cape Canaveral, Fla.

Two NASA astronauts, plus one astronaut from Japan and another from France, will cap their nearly 200-day stay on the space station, a mission that was known as Crew-2.

Akihiko Hoshide of JAXA, the Japanese space agency. Mr. Hoshide, 52, had made two previous trips to space. He was a member of the crew of the space shuttle Discovery in 2008, and in 2012 he spent four months on the space station.

Shane Kimbrough of NASA. Mr. Kimbrough, 53, is the commander of Crew-2. He also made two earlier trips to space, once on the space shuttle Endeavour in 2008 and then spending more than six months on the space station from October 2016 to April 2017.

K. Megan McArthur of NASA. Dr. McArthur, 49, is the mission’s pilot and previously flew on the space shuttle Atlantis in May 2009 on the last mission to refurbish and upgrade the Hubble Space Telescope. During that mission, Dr. McArthur, an oceanographer by training, operated the shuttle’s robotic arm to grab the telescope and place it in the cargo bay.

Dr. McArthur is married to Bob Behnken, one of the astronauts who traveled on the first astronaut flight of the same SpaceX capsule last year. She will sit in the seat he occupied during that flight.

Thomas Pesquet of the European Space Agency. Mr. Pesquet, 43, previously spent six months on the space station from November 2016 to June 2017, overlapping with Mr. Kimbrough for most of his stay. He is from France. Most recently, Mr. Pesquet has served as the space station’s commander.