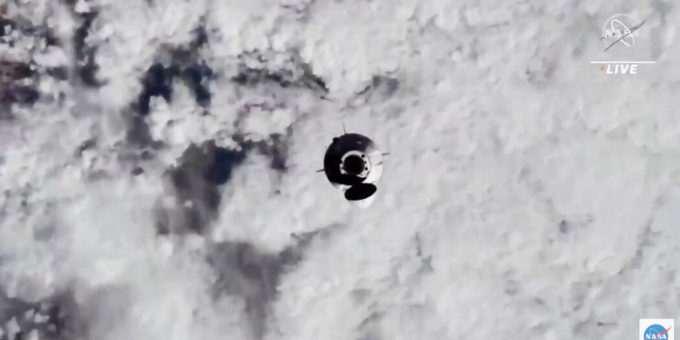 Four astronauts boarded the International Space Station on Thursday after a daylong trip inside a spacecraft built by Elon Musk’s space company, SpaceX. The quartet pushed to more than 600 the number of people to have flown to space, a further milestone in 2021, the busiest year for human spaceflight in over a decade.

“Docking complete, happy to be at the I.S.S.,” Raja Chari, the Crew-3 commander, said from the capsule as he and his fellow astronauts, buckled side-by-side in their seats, joined hands in celebration.

Almost two hours later, the hatch opened and the smiling crew members entered the space station one at a time, each wearing blue jumpsuits. They are to remain in orbit until April 2022.

The crew includes Mr. Chari and two other NASA astronauts, Kayla Barron and Tom Marshburn, as well as Matthias Maurer, the German astronaut representing the European Space Agency. They joined three inhabitants already on the space station, two Russians and a NASA astronaut who is in the middle of a nearly yearlong mission.

Just after boarding, Mr. Marshburn pinned official NASA astronaut badges to the uniforms of Mr. Chari, Ms. Barron and Dr. Maurer. While Mr. Marshburn is a veteran of earlier astronaut missions, the other three are on their first trips to orbit.

The docking of Crew-3, the name of the mission, capped a flurry of spaceflight activity this week for SpaceX and NASA, which coordinated the Monday night return of Crew-2, four other astronauts who had spent more than six months on the space station. The company is scheduled to launch another rocket on Friday, carrying satellites for its high-speed internet constellation, Starlink, to orbit.

In 2021, more people have traveled to space than in any year since 2009. The trend is part of a surge led by a space tourism industry backed by billionaires and a mounting space race among the United States, China and Russia.

During Crew-3’s six months on the space station, the astronauts will work on over 200 science experiments, from printing fiber optics to studying how concrete hardens in microgravity. Some of the astronauts will stick to an “enhanced spaceflight diet” as part of an investigation that aims to determine the healthiest meal plan for astronauts living in space for extended periods of time. It’s one of a handful of scientific investigations that could help NASA researchers understand how astronauts will eat on longer trips to the moon and eventually Mars.

Some of the astronauts will participate in a series of spacewalks to prepare the station’s power system for new solar arrays. Those arrays will replace a set of aging solar panels that have powered the station since 2000 despite a planned 15-year life span.

The Crew-3 launch had been delayed several times from its initial launch date on Halloween, but bad weather and a “minor medical issue” related to one of the astronauts prompted more delays.

“The Dragon spacecraft was a wonderful ride,” said Mr. Marshburn during a live video tour of the capsule earlier on Thursday. After launching on Wednesday night from Kennedy Space Center in Florida, the Crew-3 astronauts took pictures from inside the capsule, ate snacks and played games to pass time, like seeing who can do the highest “number of spins without touching anything,” Mr. Marshburn said.

NASA’s next astronaut launch on a SpaceX Crew Dragon capsule will also send four astronauts, though only three have been named so far: Kjell Lindgren and Bob Hines of NASA, and Samantha Cristoforetti, an Italian astronaut. They are scheduled to head to the space station around the time Crew-3 returns in April 2022.

One possibility had been that the fourth astronaut could be SpaceX’s first Russian astronaut passenger. But stalled talks between NASA and Russia, the U.S. agency’s main partner on the space station, to arrange such a flight mean that the seat will most likely be filled by an astronaut from a different country.

“We’ve been working on that agreement for a while, and as I always say, any kind of partnership or agreement has to work on both sides,” Pam Melroy, NASA’s deputy administrator, said in a recent interview. She and Russia’s space chief, Dmitry Rogozin, took a “very positive step,” she said during a meeting last month toward securing a potential agreement to fly a Russian on a SpaceX’s mission in September 2022 in exchange for a future flight for a NASA astronaut on Russia’s Soyuz spacecraft.

“We just have some things that we have to work through,” she said.

Covaxin Found To Be 77.8% Effective Against Covid In Lancet Study

If KL Rahul Has Already Been Approached By New Teams, It Is Against BCCI Guidelines: Punjab Kings
2021-12-01