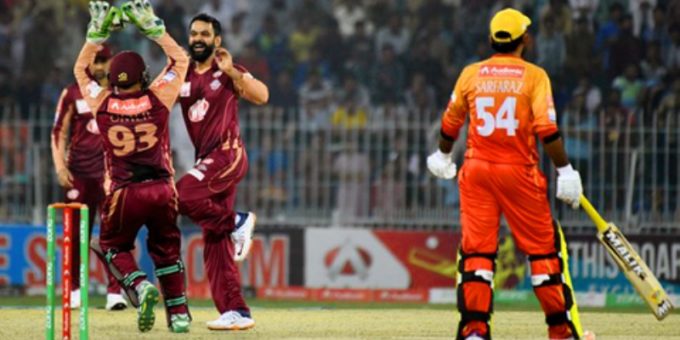 Southern Punjab sealed a 34-run win over Sindh in their National T20 Cup fixture at Faisalabad’s Iqbal Stadium on Monday.

The Punjab side, after electing to bat first, found themselves in a world of trouble having lost three of their frontline batsmen with just four runs on the board thanks to some early strikes by Sohail Khan, who finished with sublime figures of 4-15.

The tail-ender Wahab Riaz, who was promoted to one-down, managed to steady the ship with veteran Shoaib Malik as they put on a 73-run partnership on the fourth wicket.

Wahab fared better of the two as he batted with a strike rate of over 100. He went on to score 30-ball 41. He was supported by the all-rounder who went on to scored 38 off 41 deliveries.

After the partnership was broken in the 12th over, the wickets began to tumble again but Aamer Yamin and Bilawal Bhatti ensured that the side finish at a defendable total of 148-9.

Sindh wobbled in the start of 149-run target as they were reduced to 4-2 but veterans Sarfaraz Ahmed and Asad Shafiq managed to put on a 63-run partnership for the third wicket.

The procession of batsmen began once again when Shafiq departed for run-a-ball 25 which inflicted all the pressure on the former Pakistan T20I captain, who watched his batsmen getting dismissed to Mohammad Hafeez and Zahid Mahmood at regular intervals.

Hafeez and Zahid finished with four wickets each.

Sarfaraz top scored with 37-ball 45 with the help of three boundaries and a six. His dismissal was the last nail in the coffin for Sindh’s side which was bundled out for just 114 in the 18th over.

Suicides Among Children In Japan At Record High During Pandemic: Report
2021-10-14