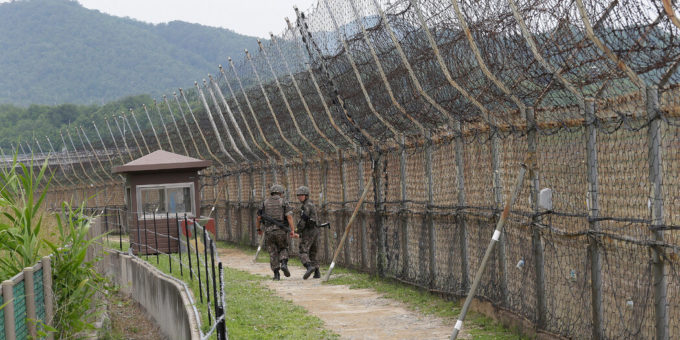 SEOUL — The South Korean military said on Sunday that an unidentified person had crossed the Demilitarized Zone into North Korea, its latest security lapse at one of the world’s most heavily armed borders.

Footage of the person climbing a tall barbed-wire fence — the southernmost of multiple fences in the 2.5-mile-wide buffer zone separating the Koreas — was captured ​by South Korean cameras at 6:40 p.m. Saturday, and sensors on the fence triggered an alarm, the military said in a briefing to the news media.

Nevertheless, the breach went unnoticed until 9:20 p.m., when the military spotted the person in the Demilitarized Zone, or DMZ, as it is commonly known. At 10:40 p.m., the person crossed the military demarcation line, the border within the DMZ, putting him or her on North Korean soil, the military said. It was only afterward that the military discovered the evidence of the initial fence crossing.

There was no immediate public response from North Korea. South Korea said it had notified the North’s military about the crossing but had yet to receive a reply.

The South’s military said it was still trying to determine who the border-crosser was — whether it was a South Korean citizen, a North Korean spy or an unhappy defector going home, or some other possibility. No South Korean soldiers were missing from their units along the eastern part of the border in Gangwon Province, where the breach occurred, the military said.

Defections across the DMZ are rare and dangerous. The two Koreas have technically been at war for decades, the Korean War having been halted in 1953 with a truce, not a peace treaty. ​The DMZ is bristling with fences, sensors, minefields, ​sentry posts and armed patrols​, and nearly two million troops are ready for battle on both sides​. At night, the south​ern​ edge of the buffer zone is flooded with high-powered lights.

Whenever a breach occurs and border guards fail to apprehend the would-be crosser, alarms are raised on both sides of the border​.​ ​In 2017, ​North Korean troops unleashed a hail of ​bullets in a failed effort to stop a fellow soldier ​who defected to the South by dashing through Panmunjom, ​the ​so-called truce village that straddles the border.

Crossings from south to north are even rarer. ​When a North Korean defector who had been living in the South fled back to his hometown in the North by swimming across a ​river in 2020, North Korea locked down the entire town ​for fear he might have brought in the coronavirus.

Later that year, North Korea caused outrage in​ the​ South when its troops shot and killed a South Korean ​fisheries official in waters near the border. The South, which said the official had been trying to defect, accused the North Koreans of burning his body at sea; the North admitted killing him, but said that its soldier could not find the body and had only burned his floating device for disease-control purposes.​

North Korean border guards were reported to be under shoot-to-kill orders to prevent the coronavirus from being brought into the country.

Some 33,800 North Koreans have defected to the South since famine struck the​ North in the 1990s, but few crossed the border directly. Almost all of them ​first ​fled ​to China, eventually coming to South Korea by way of a third country in Southeast Asia.

The eastern part of the border, snaking through rugged mountains, has been the most vulnerable to security breaches.

In 2012, a defecting North Korean soldier not only scaled barbed-wire border fences without being detected, but also had to knock on the doors of South Korean barracks to get attention.​ After that embarrassment, the South Korean military ​installed more surveillance gear, including the electronic sensors, on the border.

But crossings in the east continued. In November​ 2020​, another North Korean defector, a former gymnast​, crawled over the southernmost fence and was not captured until a day later, when he was found half a mile further south after an extensive manhunt.

In February, a defector in a wet suit swam down the eastern coast, going undetected until he came ashore​ in the South and was found walking along a road.

Such lapses have ruined the careers of military commanders overnight. ​For that reason, officers assigned to the eastern part of the border often refer to the posting as a “graveyard shift.”