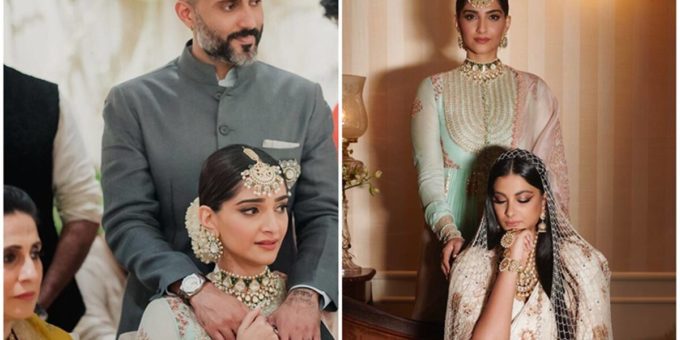 Sonam Kapoor Ahuja took to her Instagram account to share photos from sister Rhea Kapoor’s wedding. Rhea and her long-time boyfriend Karan Boolani got married on August 14 at Anil Kapoor’s residence. Sharing a photo featuring both of them, Sonam wrote, “Side by side or miles apart, we sisters will always be connected by heart. Honoured to be the sister of the most beautiful bride. Love you. @rheakapoor.”

She also shared a photo with brother-in-law Karan Boolani. “You’ve always been family. Your friendship is even more important than your title of being my brother in-law. But I’m so ecstatic that you are! Love you @karanboolani,” Sonam wrote.

The actor also shared a set of photos with her better half Anand Ahuja. Sonam posted the photo with their trademark hashtag, “#everydayphenomenal.” In one of the photos, Sonam was seen getting emotional at the wedding.

Sonam shared her look from Rhea’s wedding day too.

Rhea and Karan Boolani’s wedding was an intimate one and the ceremony took place at actor-father Anil Kapoor’s bungalow in Juhu, Mumbai.

The Kapoors also hosted a reception party for Rhea Kapoor and Karan Boolani on Monday at their home.

The function was attended by the entire family including Arjun Kapoor, Janhvi Kapoor, Khushi Kapoor Shanaya Kapoor and Sanjay Kapoor among others.

Earthquake-Struck Haiti is Lashed by Heavy Rains After Storm Hits