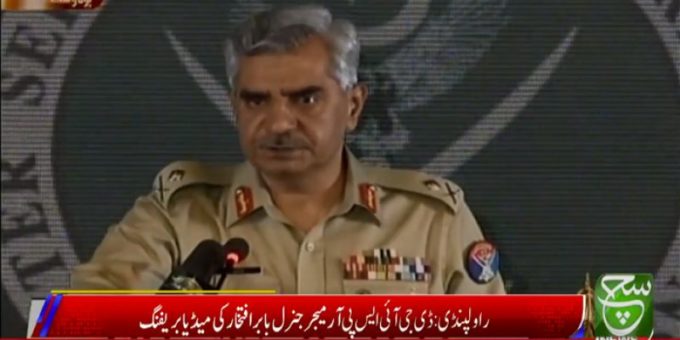 Director General Inter-Services Public Relations (ISPR) Major General Babar Iftikhar addressed an important press briefing on the Afghanistan issue on Friday and said that “something can happen” at the Pakistan-Afghanistan border but “we are ready” for all sorts of situations.

He said that Pakistan “trusts that the Taliban will take effective measures to ensure TTP does not operate against any country.”

Speaking about the situation along the Pakistan-Afghanistan border from a military perspective, the DG ISPR said that things at the moment are “fairly normal.”

“We have taken every possible step to maintain security at the border and every movement is under control there,” he said.

The DG ISPR said that other than the people of Afghanistan, Pakistanis have been the biggest target of violence in Afghanistan.

Speaking about the situation at the Pakistan-Afghanistan border, the DG ISPR said that after August 15, the border had to be closed and reopened several times.

“Soldiers of the Afghan National Army sought refuge in Pakistan several times,” he said. “We treated them in line with military values and made their return possible.”

Answering a question, Maj Gen Iftikhar said: “We trust Taliban will take effective measures to ensure TTP does not operate against any country.”

He went on to say that India’s role in Afghanistan had been “extremely negative” and the international community needs to understand it.

Replying to a question related to the “possible refugee crisis” at the border, the DG ISPR said that at the moment, there are no refugees at the Pakistan-Afghanistan border.

The DG ISPR also spoke about the recent attacks on Chinese nationals in Pakistan and said that “comprehensive security measures” are in place.

“The ministry of interior is looking after the matter, and if there is a requirement, the security will be beefed up further.”

Replying to another question, he said that while there was “always a fear of a civil war” taking place in Afghanistan, the situation is volatile and nothing can be said about it as of now.

“Right now, there is no civil war in Afghanistan,” he said.

What Is The Point Of Having Reservation, Without Employment