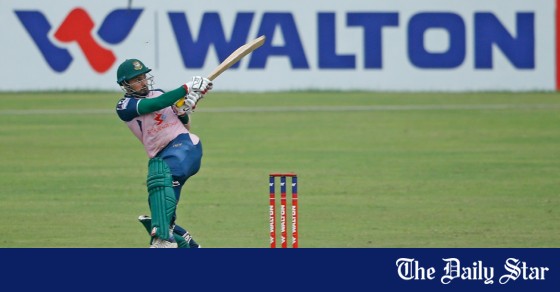 Having won the toss and electing to bat first, Sheikh Jamal Dhanmondi were plagued by a slow scoring-rate and then lost Mohmammad Ashraful (15 off 24) and Fardeen Hasan (0) in the seventh over bowled by Shakib Al Hasan. Nasir Hossain (9) and Shykat Ali (20 off 29) departed soon after, leaving Sheikh Jamal Dhanmondi at 64 for four in 12 overs. It took a monumental effort from Nurul and Ziaur Rahman to get Shekih Jamal Dhanmondi to the score they eventually piled on. 76 runs came off the last five overs as Nurul hit an unbeaten 34-ball 66, laced with four fours and five sixes taking on Taskin Ahmed, Abu Jayed Rahi and Abu Haider Rony in the death overs to take his side to 161 for five. Ziaur Rahman also laid it onto the bowlers during a 17-ball 35 with one four and three sixes. Abu Haider bagged two wickets but was the most expensive of the pace trio, conceding 53 runs in four overs while Taskin and Rahi remained wicketless amidst the Sohan-Ziaur storm. Shakib was the peak of the bowlers with two wickets for 12 runs in four overs.

Mohammedan’s innings began in dismal ways, perhaps best signified by Shakib’s struggles at the crease during a nine-ball 2. Inside six overs, Mohammedan went down to 21 for four. Left-handed Parvez missed the line of a straighter delivery to lose his stumps in the second over and then Shakib looked out of sorts at the crease. He tried to make room by moving to the leg side on a few occasions but the timing and placement was not there before right-arm spinner Mohammad Enamul castled Shakib just as he had done Parvez in the previous over. Mahmudul Hasan (12) and Irfan Shukkur (0) saw the pressure pile on Mohammedan. Ziaur Rahman, who incidentally hit his head on the turf while trying to take a catch at long on, removed Shamsur Rahman (29 off 23) and took a sharp catch off his own bowling to dismiss Shuvagata Hom after a 13 off 8 to finish with two wickets for 20 runs. Only Nadif Chowdhury’s 43-ball 57, laced with three fours and four sixes saw Mohammedan reach 145 for eight, falling short by 17 runs.

In the other afternoon match, Gazi Group won comfortably by seven wickets against Legends of Rupganj, thanks to Soumya Sarkar’s fifty. Rupganj struggled to get going and put on 132 for eight. Soumya’s brisk 43-ball 53, laced with four fours and two sixes and Mominul Haque’s 34 off 29 took Gazi close to win before Mahmudullah Riyad (15) and Yasir Ali (13) took them over the ropes with 13 balls to spare.

Prime Bank handed Partex Sporting Club a 72-run defeat in the other match at BKSP. Mohammad Mithun’s 36-ball 57 and Tamim Iqbal’s 47 off 33 helped Prime Bank to 167 for five. Rubel Hossain then picked up four wickets for 30 runs while Nahidul Islam and Nayeem Hasan bagged two each as Partex were bowled out for 95.

80 Crore To Get Free Ration Till Diwali: PM Modi

Viral: Clever Hack Of Making Garlic Bread Without Wasting Time And Food Is Winning The Internet
2020-07-14