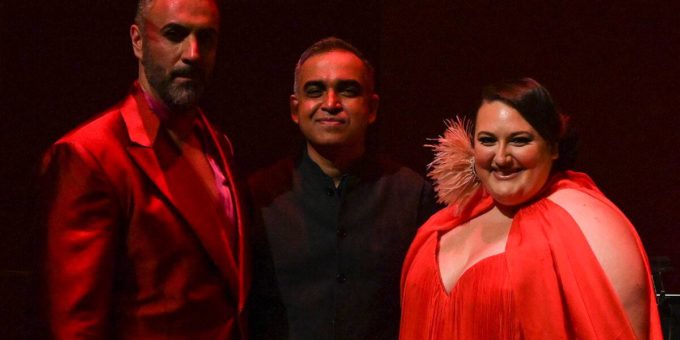 The legacy of Supreme Court Justice Ruth Bader Ginsburg has inspired all sorts of cultural paeons since her death in September 2020. They have included an exhibition of the justice’s mementos at the New-York Historical Society, an upcoming children’s picture book, and an off-Broadway play written by Dianne Nora. But the latest tribute, a new work from the Washington National Opera, may be the most apropos yet.

“Come Home: A Celebration of Return,” which runs Nov. 6-14 at the Kennedy Center, involves marquee opera singers like David Butt Phillip and Isabel Leonard performing songs that play on themes loosely related to Ginsburg’s life and work: freedom, equality, perseverance. It will be the first in-person production staged by the Washington National Opera since the early COVID-19 lockdowns, and feature not only songs from “Fidelio,” “Carmen,” “Macbeth” and “William Tell” but costumes by New York Fashion Week designer Bibhu Mohapatra.

Ginsburg was an opera aficionado (the art form played a major role in her friendship with her ideological counterpart, Justice Antonin Scalia), and a longtime supporter of the Washington National Opera. In 2016, the diminutive judge even took on, for one night only, a small, non-singing role in the company’s staging of “The Daughter of the Regiment.” Beaming throughout her performance and donning an ornate chartreuse gown and dramatic headpiece, she was showered with thunderous applause.

As much as she loved opera, however, Ginsburg was also finely attuned to fashion, famously accessorizing her court attire with collars in varying styles and materials such as delicate lace, colorful beads and shells. Once, she caught the internet’s attention by wearing a pair of sparkly, “Wizard of Oz”-esque heels to the White House. So it was only fitting that when it was time to create the costumes for “Come Home,” the Opera turned to a designer well-versed in colorful, eye-catching fashion: the India-born and New York-based Bibhu Mohapatra.

“This is my vision of her,” said Mohapatra, whose clothes have been worn by former first lady Michelle Obama and actress Gwyneth Paltrow.

The opera’s artistic director, Francesca Zambello, said that Mohapatra was chosen, in part, because of his work with a previous production of “Aida” in 2012, for which the designer delivered an opulent take on Egyptian fashion that drew from his NYFW collections. Zambello wanted to place a similar emphasis on clothes for “Come Home.”

Pretty Yende, of the Washington National Opera, performs during a dress rehearsal of “Come Home: A Celebration of Return,” in Washington. (Kenny Holston for the New York Times)

“I felt it was important to have a visual thread of attire for all the artists involved,” Zambello said.

She added: “Ruth Bader Ginsburg was the greatest advocate for everything we do in the opera house. She did so much for our art form by speaking about it publicly and encouraging people to attend — we should all be incredibly grateful.”

To that end, Mohapatra created what he called the “operatic couture” version of the Ginsburg aesthetic: jewel-toned summer gloves, lots of feather earrings, and a voluminous spin on the black robe in the form of ballgowns extravagantly composed of colorful muslins and silks.

According to the designer, the opera first contacted him about “Come Home” during a particularly difficult period in his life. Mohapatra was in India for the first time in more than two years, attending the funeral of a brother who recently died of issues related to COVID-19. He received the pitch from Zambello just as he was touring sections of the subcontinent.

“For me, it was important to jump into this because there is no one more American than her,” said Mohapatra of Ginsburg, adding that after watching hours of clips and videos of the legal icon he has become a committed “RBG-er.”

“This is a little bit of my big American dream coming true — especially as an immigrant,” Mohapatra said.

Rehanna Thelwell, right, of the Washington National Opera, during a dress rehearsal of “Come Home: A Celebration of Return,” in Washington. (Kenny Holston for the New York Times)

To learn more about the justice, Mohapatra turned to the Oscar-nominated 2018 documentary “RBG” and watched interviews on YouTube. Then he scoured India for materials, especially his home state of Odisha, on the east coast of India, where he found rich, colorful ikat fabrics.

Mohapatra decided early on to abandon the popular markers of Ginsburg’s fashion — “Collars were too literal,” he said — in favor of a more subtle approach. He was especially fascinated by the wide array of gloves Ginsburg wore, such as the fishnet pair she chose for a Time magazine shoot, and used those as a connecting thread for the singers, for whom he made assorted version in peacock tones and lace.

“There’s a stealth energy she brought to the table,” Mohapatra continued. “She sent a message with the way she dressed.” One of power, he said, and presence.

In the end, Mohapatra said, it’s that grandeur of thought he most wanted his designs to convey, and which he will most remember. Ginsburg’s “careful selection of words, her articulation, her thought process,” he said, “that is something I am going to keep with me for life.”

This article originally appeared in The New York Times.

Fifth Test between England, India cancelled due to Covid concerns
2021-09-10