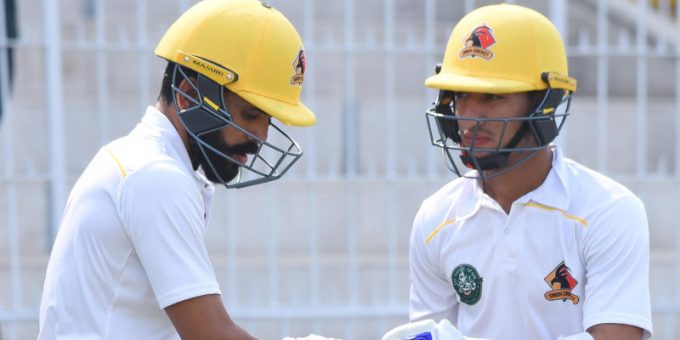 Sindh were batting at 196-4 in their Quaid-e-Azam Trophy fixture against Central Punjab in Faisalabad on Tuesday.

The side were reeling at 72-4 at one stage with Naseem Shah taking three wickets. However, Fawad Alam (78) and Saad Ali (60) managed to recover the side with their half-centuries.

Central Punjab began the second day’s proceedings at 263-7 with Ehsan Adil and Faheem Ashraf at the crease. The latter went on to score 52 but could not find a partner with whom he could form a solid partnership and the side were eventually bundled out for 313.

Elsewhere, it was a field day for the batsmen in the fixture between Northern and Southern Punjab in Sialkot.

Northern, who started second day’s proceedings at a comfortable score of 384-1, went on to declare their first innings at 550-6.

Zeeshan Malik proved to be the top scorer with 216 as he added just 12 runs to his overnight score of 204. His partner Umar Amin, who was not out at 153 at stumps on day one, added just three runs.

Captain Shan Masood and Sami Aslam put on a 98-run opening partnership for the Punjab side before the skipper fell after scoring 58. The side were 102-1 when the umpires called it a day.

On the other hand, Khyber Pakhtunkhwa were cruising comfortably at 150-0 in their fixture against Balochistan in Quetta.

Balochistan began second day at 341-3 with skipper Imran Butt and Imran Farhat at the crease on 135 and 114 respectively. The latter was dismissed for 134 but Butt went on to play a captain’s knock of 214.

Wicketkeeper-batsman Bismillah Khan’s went on to score 75 before the side declared their first innings at 553-8.

Khyber Pakhtunkhwa had a bright start to their innings as openers Sahibzada Farhan and Israrullah went on to score unbeaten half-centuries. They remained not out 72 and 71 respectively.

Eminem biggest ever freestyle in the world! – Westwood

Amazon Says ‘Appropriate’ Executive to Be Available, as US Panel Calls on Bezos to Testify
2020-05-17