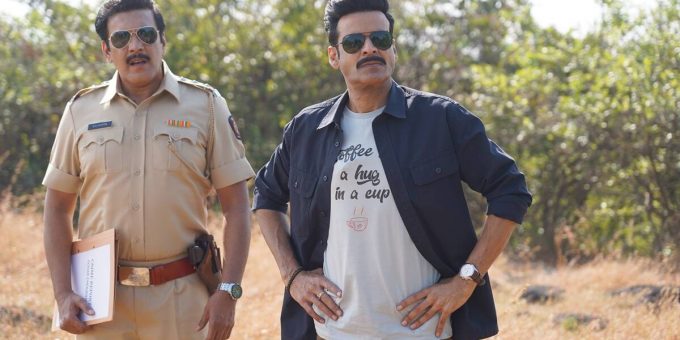 A young woman’s body is found on a hillside on a trekking trail just outside Mumbai. Her head has been bashed in. She turns out the daughter of a retired judge, who has deep connections in the police force. What he wants is a cop he thinks is chockfull of integrity, and that’s what he gets. ACP Avinash Varma (Manoj Bajpayee) organises a team in quick order, and we are all set for murder mystery-cum-police procedural in Silence… Can You Hear It?

The victim had spent the last night of her life at the plush home of her friend and the friend’s husband (Arjun Mathur). Said friend is in a coma in hospital, the husband is a loud-mouthed, do-you-know-who-I-am boor. He’s constantly yelling and throwing his weight around, and is a good bet for the guy who did it.

A few other characters show up: a young couple who have been staying at the victim’s home as guests of the family, an elderly family retainer, an impatient top cop (Denzil Smith), and an assorted bunch of goons-cum-drug dealers.

This could have been a real humdinger, because the suspense is maintained right till the end. But it is marred by some glaring plot holes. Sexual activity on the part of the victim is ruled out, but then a potential rape is mentioned, and dropped just as summarily. Huh? The murder weapon doesn’t seem to have been checked for fingerprints: in a case dripping with lists of call records, and forensic teams busying themselves at crime scene. How is it that the weapon doesn’t come up before the script decides it is time, late into the proceedings?

What stands out in the film is the tight-knit trio which starts working in tandem to crack the case: time and effort has been spent in creating the team, and each has a distinct character. The star of the show, is of course, Bajpayee. He keeps the show on the road, cracking the whip on his team, heroically stopping the other end of a bullet, and never forgetting to use his grey cells. He also is a poet, coming up with such lines as: ‘har khamoshi mein zubaan nahin hoti’. Yes, we can hear it.