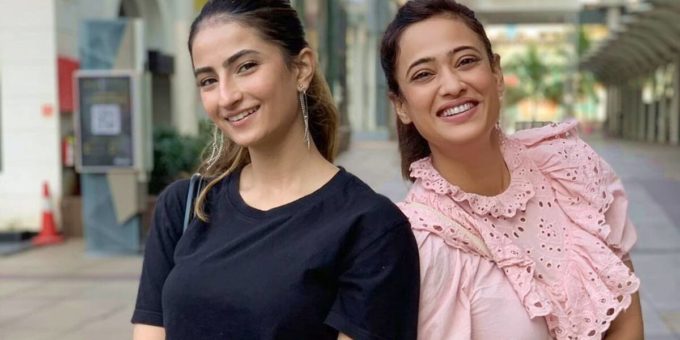 Since Shweta is currently away in Cape Town, participating in Khatron Ke Khiladi 11, Palak is taking care of her brother Reyansh back home in Mumbai. The public fight between her mother and step-dad Abhinav began soon after Shweta left for the shooting of the show.

Shweta and Abhinav, who tied the knot in 2013, have a four-year-old son Reyansh. The couple, however, separated in 2019. Abhinav had recently shared a couple of videos on social media accusing Shweta of leaving their son alone at a Mumbai hotel to participate in KKK 11 in South Africa. Refuting all his allegations, Shweta released CCTV footage of her estranged husband trying to forcibly get hold of Reyansh and allegedly assaulting the two of them. The National Commission for Women (NCW) wrote to the Mumbai Police recently and sought their intervention in this case.

Palak’s father and Shweta’s first husband, Raja Chaudhary had recently said in an interview, “I had messaged Abhinav not now but last year after I read about the sexual harassment allegations against him by my daughter Palak Tiwari. As a father I was concerned for her and wanted to know what exactly had happened.”

He further added that Shweta wasn’t a bad wife though. “She is an excellent mother and a very good wife. It is just a sheer coincidence and her bad luck that history is repeating itself with her and her second marriage too has failed. But then this doesn’t make her wrong or a bad person.”

In the meantime, Palak is set to make her Bollywood debut with supernatural thriller Rosie: The Saffron Chapter that went on floors in December 2020 in Pune.

With Tokyo Olympics Weeks Away, U.S. Warns Americans Not to Travel to Japan