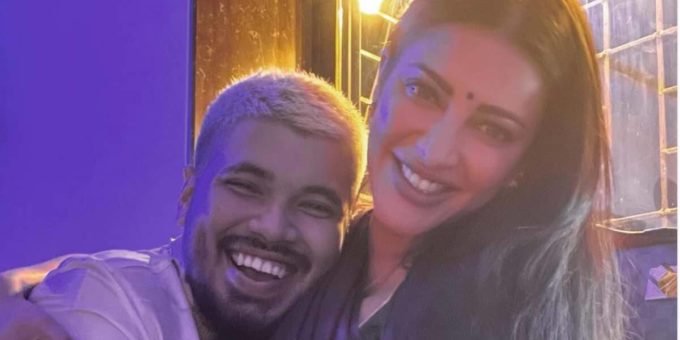 Shruti Haasan recently revealed details about her relationship with boyfriend Santanu Hazarika. On Mandira Bedi’s show The Love Laugh Live Show, she said that the two developed a strong connection through art and other similar interests.

When Mandira asked her about Santanu and when their love story began to blossom, Shruti revealed that Santanu had done a piece of art for one of their common friends but they had never really met each other properly. The actor said, “I think we crossed paths a couple of times and we completely just walked past each other.”

Shruti Haasan mentioned she and Santanu Hazarika started chatting online and had a lot of common interests like their love for art, Swedish metal band Meshuggah and graphic novels. “Everything basically that I love,” she said.

When Mandira asked if she wanted to hide the relationship with Shantanu, Shruti said, “I hid a lot in the past. I have been very particular. I have been like, ‘Oh my God, I am totally single’ for the longest time. Because people were like ‘you have to appear that way, you have to appear desirable, available’. And one day I was like, ‘For whom? For what?’ I also felt like it was disrespectful to my partner– to hide it. It may or may not work out. We don’t know but I think it’s important to respect your environment and the people in it.”

Mandira Bedi also asked Shruti Haasan about the qualities she would like in her life partner. Shruti said, “I would be looking for compatibility. It means many things. It’s just not enough that you love the same things. It’s that you have the same idea of how you want to approach life, that you don’t have major clashes when it comes to finances, religious decisions, ways of life.”

When quizzed if Shruti’s current partner had these qualities, the actor said he had around 80 per cent of the qualities that she would want in her man. Asked if she is a romantic person, Shruti answered that she likes keeping in mind the little details about the people she loves.

Coronavirus vaccination registration to open for all citizens after Eid: Asad
2021-04-12