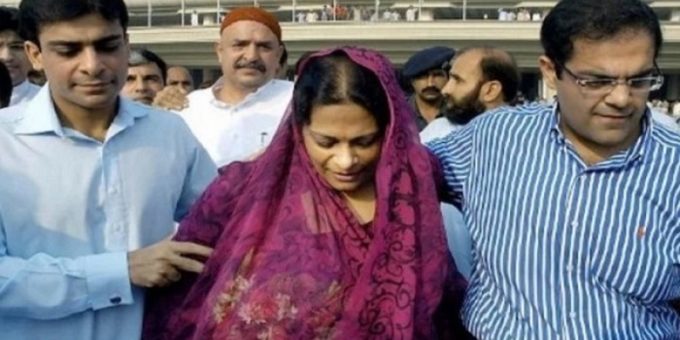 An accountability court in Lahore on Friday indicted Nusrat Shehbaz, the wife of Leader of the Opposition in National Assembly Shehbaz Sharif, in a money laundering reference filed by the National Accountability Bureau (NAB).

In December last year, Nusrat was declared absconder by the accountability court for her persistent non-appearance in the money laundering reference.

During Friday’s hearing in the court of accountability judge Naseem Virk, Nusrat was indicted through a pleader as she is currently in London. NAB prosecutor Usman Rashid Cheema was also present on the occasion.

The court also accepted Shehbaz’s plea for exemption from appearance in the case. His lawyer, Chaudhry Nawaz, informed the court that his client was unable to appear in person due to ill health. The court subsequently approved his request.

Shehbaz suspended all political activities a day ago as he was advised “complete rest” by doctors after he had slipped on a staircase on Wednesday.

In August 2020, the NAB had filed before an accountability court a Rs8 billion reference of money laundering against Shehbaz, his wife, his two sons and other family members.

The reference accused Shehbaz of being a beneficiary of assets held in the name of his family members and “benamidars” (ostensible owner), who had no sources to acquire such assets.

The reference further said that Shehbaz’s family had failed to justify the sources of funds used for the acquisition of assets.

It said the suspects committed offences of corruption and corrupt practices as envisaged under the provisions of National Accountability Ordinance 1999 and money laundering as delineated in the Anti-Money Laundering Act 2010. It asked the accountability court to try the suspects and punish them under the law.

With the continuation of case proceedings, the accountability court had in December also issued non-bailable arrest warrants for Nusrat before declaring her absconder for not appearing before the court. In reply, the respondent had challenged the warrants through PML-N deputy secretary-general Attaullah Tarar as a special attorney on Jan 19, 2021 in the Lahore High Court.

The petitioner had pleaded that she was an old and infirm woman of over 66 years of age and was a known chronic patient of a number of serious ailments, including cardiac issues. She had to go abroad in early 2019 for health reasons and since then she was stuck there for medical treatment.

A day later, the LHC had restrained the NAB from taking coercive measures against Nusrat.

In March, the LHC bench headed by Justice Sardar Muhammad Sarfraz Dogar had set aside an order of the accountability court wherein Nusrat had been declared an absconder.