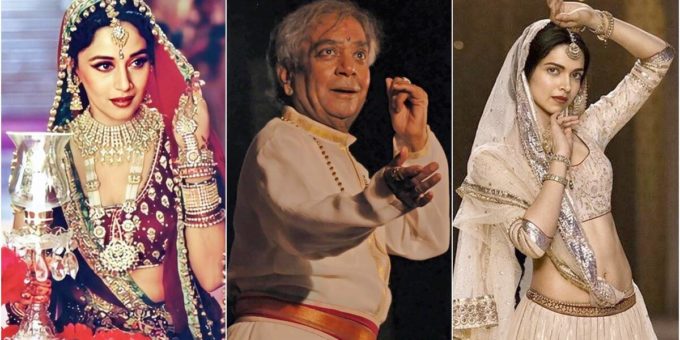 Kathak legend Pandit Birju Maharaj died at his home in Delhi on Sunday at the age of 83. A recipient of the country’s second-highest civilian award, Padma Vibhushan, the Kathak exponent was an equally prolific singer, poet and painter. While his work in the Indian film industry was comparatively limited, he left his distinct stamp every time he choreographed actors. By Maharaj’s own admission, his favourite remained Madhuri Dixit with whom he worked in Dil Toh Pagal Hai, Devdas and Dedh Ishqiya. He also directed Kamal Haasan in Vishwaroopam and Deepika Padukone in Bajirao Mastani. His first collaboration, however, was Satyajit Ray’s cult classic Shatranj Ke Khiladi.

Haasan wrote a tribute to the dancer and wrote, “Pandit Birju Maharaj was an unparalleled dancer and he has passed away. I learned a lot from him as his student by watching him from a distance like Ekalavya and also by working with him closely during Vishwaroopam. He dedicated his whole life to music and dance.”

Pandit Birju Maharaj started teaching Kathak at the age of 13 in Delhi. An institution in himself, he gave the Lucknow gharana, the much needed push to keep it relevant among the young generation. So much, that his name became synonymous with Kathak for nearly three decades across the world. Mostly keeping it to performing arts and teaching the dance form, his Midas touch in Bollywood is rare and precious.

The Kathak maestro choreographed pieces like “Makhan Chori” and “Phaag Bahar” in his early days. His first brush with Indian cinema happened with Satyajit Ray’s Shatranj Ke Khiladi (1977) in which he choreographed, composed music and even sang for two dance sequences. One was a performance where Wajid Ali Shah (Amjad Khan) is seen dancing with his queens. The other one was a solo dance forming the backdrop of a crucial sequence of the story.

Madhuri had claimed that the dance guru had a lasting impact on her mind when she first saw him perform on stage at the age of 5. But when she finally got to met him years later during a workshop in the US, their first conversation wasn’t about Kathak.

“I was expecting a straight dance practice but was surprised when the first thing he asked me was to show him the ‘ Ek, Do, Teen’ move. He wondered how I do it. My respect for him soared when I discovered that he was interested in all dance forms,” Madhuri revealed to TOI last year.

Maharaj also worked with Deepika Padukone in Bajirao Mastani. He had said that he watched Happy New Year in 2014, because he wanted to get familiar with Deepika Padukone’s body movement. “Deepika does brilliant acting but she should do more classical dance so that she can improve her dancing skills,” the Kathak exponent had said, back in the day.

Deepika had a cold feet too because “she was not Madhuri Dixit.” Birju Maharaj ultimately made Deepika perform a thumri on “Mohe Rang Do Laal” where her Mastani expresses her love to Bajirao (Ranveer Singh). The song got Maharaj a Best Choreographer trophy at Filmfare too.

In Maharaj’s maiden collaboration with Madhuri, he made her perform a jugalbandi (fusion) on the drum beats. This was the sequence in Dil Toh Pagal Hai (1997) where her Pooja does Kathak fused with contemporary moves, with Shah Rukh Khan’s Rahul beating the drums in the backdrop. This was also a crucial introduction of her character in the blockbuster movie.

“Maharaj ji interpreted all the drum beats as various expressions of a peacock dancing with abandon. He has made dancing into a form of science that brings out the beauty of the art form that is dance. The grace and poise, he brings to dance is amazing,” Madhuri said, adding “once you learn a classical dance form like Kathak, you can pick up any dance form in the world.”

“Maharaj ji has a wonderful sense of humour and regales us with funny stories from his travels all over the world,” she shared.

In 2002, he gave Madhuri Dixit, probably the most graceful Kathak routine – “Kaahe Chhed Mohe” from Devdas. A pure classical number, the song was all about ‘bhaavs’ and portrayed Madhuri’s moves like never before — from her grace, beauty to that eyebrow movement. “Effectively there are numerous fantastic dancers in Bollywood. My favorite has been Madhuri Dixit, whom I’ve labored with in Devdas and Dedh Ishqiya. She is a educated Kathak dancer and has pure grace,” Maharaj said, calling Madhuri the best dancer in Bollywood.

Recalling of following Maharaj’s footsteps literally, Madhuri told TOI, “The mudras, abhinayas, body language–I felt like I was in heaven when we were on the sets. I think his art is like the rainbow, ‘saptarangi’ but with the ‘navarasas’. It is all so inspiring and unending; for me he personifies Kathak and he is dance!”

The virtuoso also choreographed a group dance on “Aan Milo Sajana” in Gadar: Ek Prem Katha. Through the sequence, the audience got to feel the agony and turmoil Ameesha Patel’s character is going through.

His work also travelled down south through Vishwaroopam, for which he won his only National Award in 2012. The song “Unnai Kaanadhu Naan” featured Kamal Haasan performing Kathak. “Even though he is a highly talented dancer, he did lot of hard work for the song. He spent hours getting every step right and he deserves special appreciation for that. What is more interesting is that he is the only male I have ever choreographed for,” Maharaj had told IANS.

The prolific dancer was bestowed with the Sangeet Natak Akademi Award in 1964 and the Padma Vibhushan, the second-highest civilian award of India in 1986. Despite staying active on stage and keeping his dance school ‘Kalashram” afloat in Delhi, Bajirao Mastani (2016) was the last of his works in Bollywood.

“I am not comfortable with every song. For me, dance is like connecting with the almighty. I cannot choreograph something, which is raunchy and demands loads of skin show… I prefer to stay away from it,” he told PTI.

After Pushpa, Hindi dubbed version of Allu Arjun starrer Ala Vaikunthapurramuloo to release in cinemas on January 26, 2022 : Bollywood News