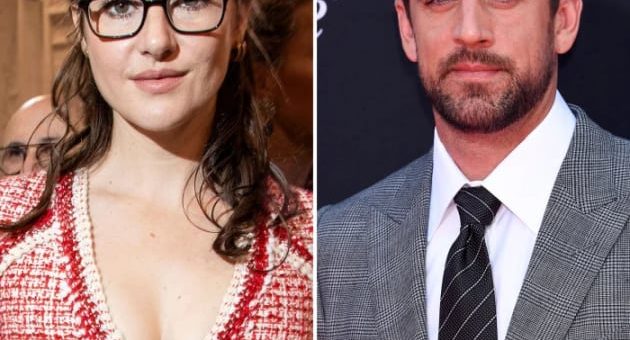 When Aaron Rodgers caught Covid after lying to the world and claiming he’d been vaccinated, Shailene Woodley put her reputation on the line to defend him.


Rodgers and Woodley were engaged at the time, so it made sense that she would have his back, of course.


But the actress went above the call of duty and showed a side of herself that we’d never seen before during the controversy, railing against the media and lashing out at some random dude on the street, speculating that his d-ck must be smaller than Rodgers’ because he drives a crappy car.


Yeah, it didn’t really make sense at the time, and Woodley is probably regretting it these days, having been dumped by Rodgers just a few weeks later.


Some were some surprised by this week’s news that Rodgers and Woodley had called off their engagement.


But others realized that the 2021 NFL MVP has a reputation for being obsessive, egotistical, and … well, a little bit of a jerk.


Shailene, on the other hand, is a free spirit type who brushes her teeth with clay, so it’s not shocking that their relationship couldn’t withstand the strain of an intense football season that ended in crushing disappointment for Aaron.


Perhaps if Rodgers had led the Packers to another Super Bowl like he’d planned, he and Shailene might have ridden off into the sunset together.


“This year with all the drama that Aaron put on the Green Bay Packers with trade demands and just being difficult with management really put Aaron’s focus on making it right,” a source close to the situation tells Hollywood Life by way of explanation.


“He wanted to get to and win the Super Bowl, he wanted to be the league’s MVP and that made his main focus his career.”


“But the person who didn’t get the focus was Shailene,” the insider continued.


“She was doing her own thing for her career and just wanted more support from Aaron that just didn’t happen,” they added.


“She wanted to have him be more present and invested in her and the relationship and it didn’t happen. She thought she was taken for granted and it led to the [downfall of the] romance.”


Another insider confirmed that Shailene was unhappy with the circumstances.


“While Shailene is supportive of Aaron’s career, he put football first and they were barely spending any time together,” a source close to the situation told In Touch.


“She felt he neglected their relationship. Neither of them was happy.”


Interestingly, despite Woodley’s apparent frustration with her partner’s priorities, it seems that it was Rodgers who called it quits.


The In Touch source says that Rodgers isn an “independent guy” who “got cold feet” about his impending nuptials to Shailene.


In the end, the tipster claims that in the and, despite their mutual affecrion, the two just “couldn’t make it work.”


“There were too many obstacles. They’re both adults and decided to part amicably,” this person claims.


Well, Rodgers’ ignorance about infectious diseases means that he’s sure catch all sorts ot things, but in the end, it seems he just couldn’t catch feelings for Shailene!

Ali Fazal’s Death On The Nile does well on opening

Watch: “Range Of Emotions” In Indian Dressing Room After Thrilling Win Against England At Lord’s
2021-08-17