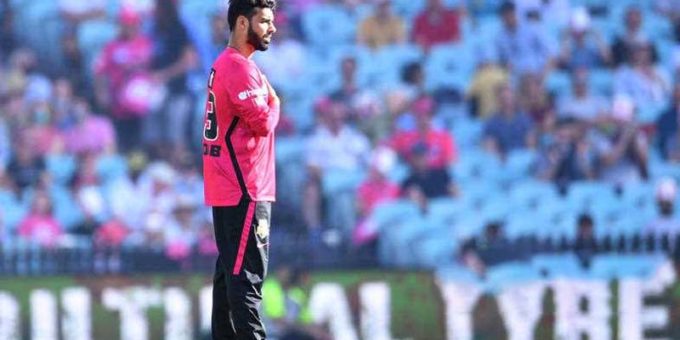 Pakistan leg-spinner Shadab Khan has made his Big Bash League (BBL) debut for Sydney Sixers, against Brisbane Heat, on Wednesday.

Despite making his debut, Shadab won’t be able to join his
teammates, for a week, due to Australia’s strict Covid-19 protocols.

“Under the BBL’s biosecurity protocols Shadab is unable to
join his teammates until he has been in Australia for a week,” the Sixers said
in a press release before the match. “The leg spinner has passed several PCR
tests and is doing rapid testing daily to ensure his health status is monitored
to the minute.”

“Shadab will have to use a separate dressing room to his teammates, sit away from the players’ bench and not be a part of any on field celebrations,” the statement added.

The @sixersBBL have included 🇵🇰 star Shadab Khan in their XI for tonight’s clash with the Heat #BBL11 pic.twitter.com/Q94GRDofDc

Shadab termed life at Sixers, so far, ‘strange’ while
talking in an interview before the match against Brisbane Heat.

“It is pretty strange but nowadays the whole world has strange things happening,” said Shadab. “I understand, everywhere is the same and hopefully I will join the team soon.”