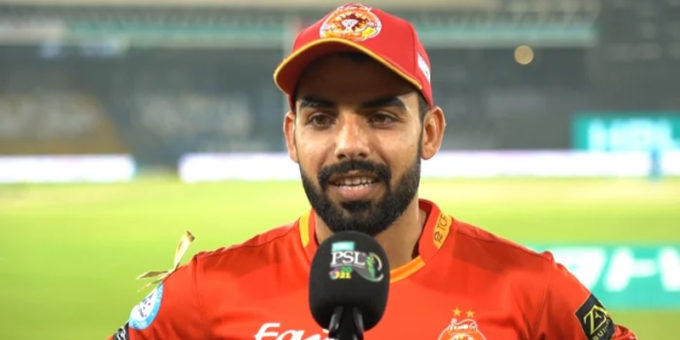 Islamabad United captain Shadab Khan has called for a change in batting strategy in the upcoming matches after suffering a defeat in the first match after the resumption of Pakistan Super League (PSL) sixth edition.

United suffered a five-wicket defeat against Lahore Qalandars in match 15 of the cash-rich league which resumed in Abu Dhabi on Wednesday.

Shadab was very optimistic that his side would make a strong comeback in the tournament.

“We have a lot of positives from the game,” said Shadab. “The conditions here are a bit different from Karachi. Wickets are a bit dodgy and as a batsman, we have to change our strategy for upcoming games,” Islamabad captain said in a video released by the Pakistan Cricket Board

“I am satisfied with my team’s performance. We will learn
from our mistakes and will make a strong comeback in the next game,” he added.

Shadab went on to praise the young pacer Mohammad Wasim Jr. for his consistent performances in the league. “Getting picked for Pakistan team means he has a lot of potential,” he said.

“Performing under pressure especially being an emerging player is very good. He is very consistent and bowls at excellent lengths in any given situation.

“He was brilliant for us in Karachi and doing great here as well. He bowls well in death overs and in pressure situations, which is a good sign for us and for the Pakistan team,” he added.

Commenting on his comeback in competitive cricket, Shadab said, “I am 100 per cent fit and feeling a lot better.”

“Playing a game after two to three months gape is not easy. I am confident to return to my best in upcoming games,” he said.

Delhi HC refuses to stay the release of a film based on the life of Sushant Singh Rajput : Bollywood News

Man who fell to death from Russian embassy in Berlin was a spy, claims German security services
2021-11-05