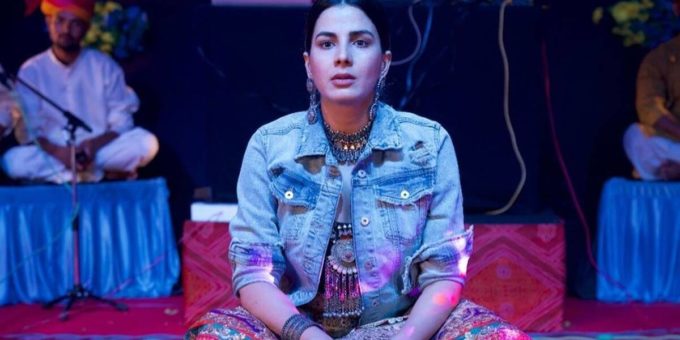 Two different worlds come together, break apart and finally seamlessly merge. Sounds poetic, and possibly that was the intention of Shaadisthan, starring Kirti Kulhari, Nivedita Bhattacharya and Kay Kay Menon. Yet, the end result is an overbearing and condescending sermon rather than an attempt to dismantle patriarchal foundations in society. Shaadisthan tells the story of a road trip taken by a conservative family who want to get their 17-year-old daughter married. On the trip, they have a band for company. They don’t care about society’s rules as Kirti Kulhari’s character Sasha would like you to know. She barely smiles in the film —she is too grim about the rot in society.

The destination for the two sets of people is the same: To get to a wedding. The daughter Arshi doesn’t want to get married, but her parents are insistent, or rather the father is. He fulfills the desi stereotype of an uncle who doesn’t let his daughter talk, and almost beats up one of the members who try coming close to her.

She breaks down and asks Sasha (Kulhari) and her crew, “Are your parents monsters?”

From then on, Sasha plays messiah to Arshi and her mother, played by Nivedita Bhattacharya. She has the sensitivity of a battering ram and is eager to let Arshi’s mother know that she has the privilege to marry whoever she wants and that she revels in her freedom. This empowering discourse happens when they are making rotis. Sasha explains, “I’m making food because I want to. You’re here because of your conditioning.” The conversation is almost painful to watch as Sasha asks her, “When was the last time you had sex?” She continues prodding, “When was the last time you hugged your ‘voh’?” Meanwhile, Arshi, with a blank face, tells one of the band members that she feels like killing herself. Yet, after more preaching by Sasha, there is a sudden shake-up of mindsets, age-old beliefs have been shattered, and personalities are rewritten. All in a matter of minutes. Happy ending for everyone.

We have little or no idea about Sasha’s life or even more sides to her personality than just passing judgement on others who don’t have the same level of freedom as she does. In her role as Sasha, Kirti Kulhari just glowers at others, directing a snarky comment at anyone who interferes in her space. But she’s the heroine in the show, and you know you have to root for her.

There are a few pleasant moments scattered here and there, like when the mother reveals shyly that she would like to go on her own one day, and the beginning of the road trip.

Shaadisthan is now streaming on Disney Plus Hotstar.

California Mask Rules After June 15: What to Know