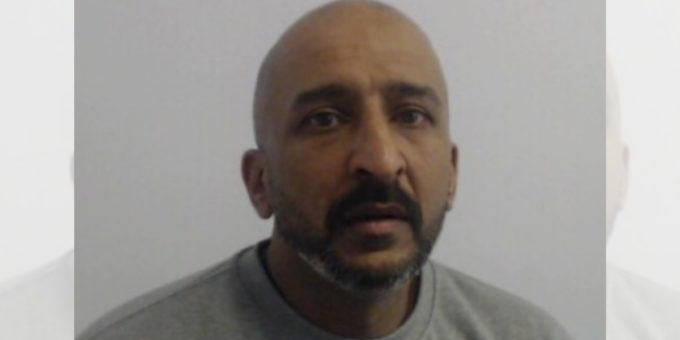 A pervert who demanded sex from women after confronting them in their own homes has been jailed for seven years.

Arfan Khan crept upstairs in one woman’s house after she left the back door unlocked, grabbed her wrist, blew her a kiss and told her “come with me”.

The terrified woman shouted for help and her boyfriend, who was downstairs, grabbed him and ejected him from the property.

A short time earlier he had attempted to get into another woman’s house nearby. She had opened her front door thinking a parcel was being delivered to be confronted by 44-year-old Khan who told her, “I am Khan. I am here to have sex with you.”

He wedged his foot in the door but she managed to shut him out and took a photograph of him as he peered through her window before she called police.

“The fortitude of that lady was remarkable,” commented Recorder Simon Killeen, who sentenced Khan at Bolton Crown Court.

While under investigation for the offences sex pest Khan also sexually assaulted a man outside an storage unit, grabbing his genitals.

And it was not his first sexual offence as the court heard how Khan has a previous conviction for following a man walking his dog at Rivington Barn and trying to grab his genitals.

Khan, of Mayor Street, Bolton, was found guilty of trespass with intent to commit sexual offences and sexual assault following a trial last year and was also sentenced for an affray he and his brother were involved in on Spa Road, Bolton, following a feud with another family.

Jane Dagnall, prosecuting, told how just after 3pm on June 28, 2020, a woman was alone at her home in Deane with her young son and when she opened the door, Khan told her he wanted to have sex with her.

She managed to force the door shut and he then went to a neighbour’s house before leaving and heading to another stranger’s house in the Deane area.

A woman had been cleaning her kitchen and did not lock her back door after emptying a bucket outside.

“She went upstairs to the bathroom and a few minutes later was aware of Mr Khan stood in her open bathroom door. He was staring at her,” said Miss Dagnall, who added that he grabbed her wrist and blew her a kiss, intimating that he wanted to have sex with her.

“It was towards the bedroom and she was fearful of what he might do,” said Miss Dagnall

Fortunately the woman’s boyfriend was in the house and threw him out. He spotted that Khan had taken the back door key from its lock.

Then, on August 27, 2020 a man was locking up his business premises for the day when Khan asked him whether he was alone and whispered the word “sex” .

Khan was asked to leave but then grabbed at the man’s genitals.

The victim jumped back and told Khan to “go away in no uncertain terms”.

Colin Buckle, defending, said Khan accepts that he has a significant addiction to alcohol and drugs and on the day he went into the strangers’ homes he had been drinking and was heading home after being dropped off on his street.

“It was an impulsive decision to go and act like this,” said Mr Buckle.

He stressed that, although Khan’s presence in the women’s homes would have been frightening for them, no serious harm was caused.

Sentencing Khan, who appeared in court via a video link from Forest Bank prison, Recorder Killeen told him he poses a high risk of harm to the public.

“It is difficult to image anything more terrifying for a woman on her own than somebody attempting to get into her house saying that he wanted to have sex with her,” said Recorder Killeen.

“It was clear from the evidence she gave in the trial that she was absolutely terrified.”

He told Khan, who has convictions for 24 previous offences, that the offending was so serious only a significant prison sentence was appropriate.

“You have no real insight into what you were actually capable of. You continued to deny what is obvious – that these offences were sexually motivated,” said Recorder Killeen

“You continue to trivialise your behaviour. Sadly you don’t really show any remorse or victim empathy.”

Katy Perry named as British Asian Trust Ambassador: Are we guilty of racism in mocking this?
2020-02-07