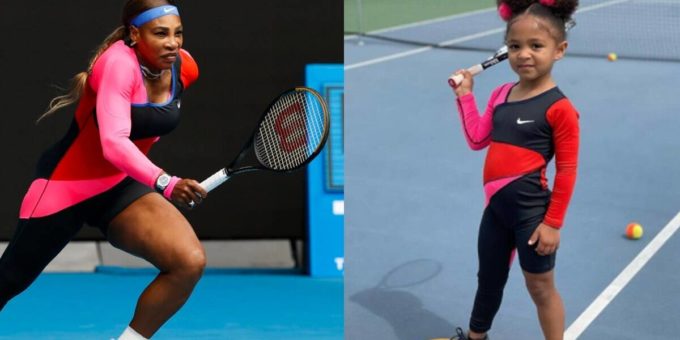 Serena Williams’ daughter Olympia recently turned heads by appearing in a mini version of one of her mother’s iconic costumes.

At a recent tennis session of her own, the three-and-a-half-year-old wore a catsuit that resembled the one worn by Williams at the Australian Open earlier this year.

The photo was shared by Olympia’s father Alexis Ohanian on her Instagram account. The outfit, in shades of black, red, and pink, features slacks that cover the right leg entirely while leaving the left leg open. Tying her middle-parted hair in two little ponytails, Olympia wore the outfit with Nike tennis shoes.

“Awwwww mannnnnn I asked you to save this post until I was next to her side by side in my same outfit,” the mother commented on the post.

In February, Williams wore this outfit as a tribute to the late track athlete Florence Griffith Joyner. “I was inspired by Flo-Jo, who was a wonderful track athlete, amazing athlete when I was growing up. Watching her fashion, just always changing, her outfits were always amazing,” the tennis player was quoted as saying by ESPN.

“The Nike team actually thought of this design of inspiration from Flo-Jo. I was like, ‘Oh, my god, this is so brilliant,’” she added.

Hilarious Picture Of Egg Fail In The Kitchen Is Relatable For Everyone, Heres Why

Panipat: Kriti Sanon plays a healer who turns into a WARRIOR (role details out) | Bollywood News
2019-07-19