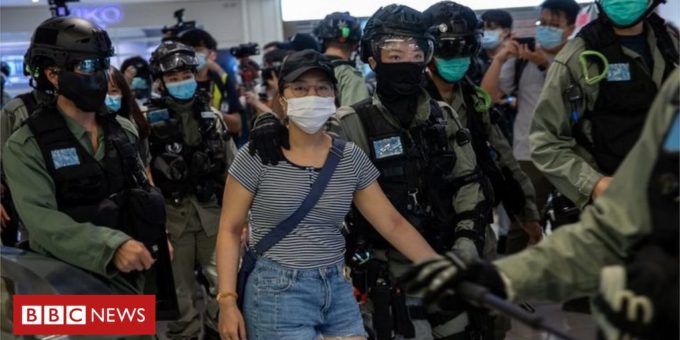 A popular mobile game has been taken offline in mainland China for “rectification work”, after netizens discovered its musical director had written a song containing Morse code with a hidden Hong Kong pro-democracy message.

This was done after netizens discovered a controversial song by Hong Kong musical director ICE, real name Wilson Lam, on his Soundcloud account.

The piece, Telegraph 1344 7609 2575, was actually posted on his page in March, but after netizens discovered it contained in Morse code the phrase “Liberate Hong Kong, the revolution of our times”, many in the mainland called for him to be sacked.

It is unclear who was able to decipher the hidden message, and it is unlikely that anyone within the mainland themselves was able to, given that Soundcloud and YouTube are blocked in China.

“The person who discovered this is really amazing,” one user says, receiving more than 200 likes. Others applaud the “cleverness” and “skill” of someone being able to decipher Morse code.

Many users outside the mainland have also commented on Mr Lam’s Facebook page, thanking him for his supporting Hong Kong’s activists.

In mainland China, pro-democracy messages in support of Hong Kong activists are heavily frowned upon and there has been active censorship of them. The central Chinese government has criticised activism in Hong Kong as “separatist” behaviour that is often “violent” and has the potential to cause damage to China as a country.

Mr Lam has since announced his resignation on Facebook. In his statement, he said that his song had “created controversy resulting in a wide discussion among netizens”.

He said that the song was his “private activity” and “has nothing to do with Rayark Games” and had offered his resignation “with immediate effect”.

Rayark Games’ mainland agent company, Dragonest Games, have also issued a statement saying that “further collaboration with the artist will be stopped. We apologise for any impact from the incident and strongly condemn the action of the composer”.

Mr Lam’s piece has also been removed from Soundcloud but versions exist on YouTube.

Morse code was a method of telecommunications invented in 1837 using a series of dots and dashes. It played a key role in early transatlantic communications, and was crucial during World War One.

Barrington Pheloung’s Inspector Morse theme included a motif based on the letters M.O.R.S.E; while composer Ronnie Hazlehurst wrote the name of the 1970’s comedy starring Michael Crawford into the theme of Some Mothers Do ‘Ave ‘Em, a memorable musical joke which reportedly earned him £30.

Next story: Nordic couple gets married in border ceremony