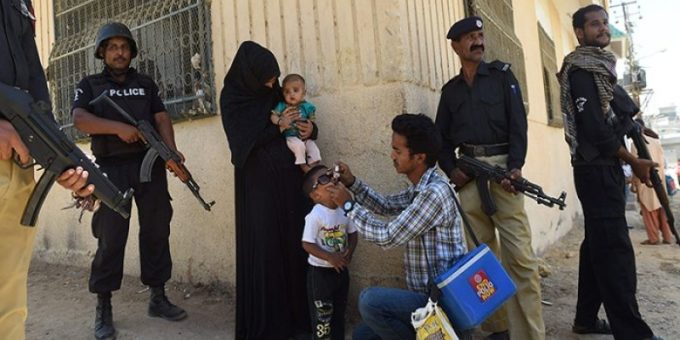 A policeman deployed to provide security to polio vaccination teams was martyred in Khyber Pakhtunkhwa’s Tank district on Sunday after a gunman opened fire, officials said. It was the second such incident to occur in the area in as many days.

“Two policemen were deployed for the security of polio teams at the BHU during the five-day province-wide polio drive,” he said, adding that Khan was ambushed outside the health facility.

The martyred official had left the BHU to visit a nearby shop when he was attacked, the DPO said, adding that the gunman managed to escape. DPO Ahmed said the body was transferred to District Headquarter Hospital Tank for the completion of legal formalities.

Meanwhile, security personnel and teams from the Counter Terrorism Department (CTD) reached the scene and initiated a search operation. However, no arrests have been made so far.

Aimal Khan, provincial spokesman for the anti-polio programme, said the gunman opened fire at the team, adding that one of the cops sustained bullet injuries to the leg, but returned fire and managed to injure the attacker.

The DPO said police had arrested the suspect and moved him to the District Headquarters Hospital for treatment. He further said that member of the polio team were unhurt in the incident. He said police suspected that the incident was a result of a personal enmity, adding that an investigation was underway.

Policeman martyred in TTP gun attack
On Saturday, a policeman was martyred and an officer of frontier constabulary (FC) injured in a gun attack on a polio team in Tank.

DPO Ahmed said that police and FC personnel were guarding the polio teams in the Chadrar area situated on main Wana Road when gunmen opened fire. “The gunmen, who were on a motorbike, targeted police personnel guarding the [polio] team,” the DPO said, adding that Havaldar Iqbal died of bullet wounds and FC officer Ritaj Khan was injured.

The banned Tehreek-i-Taliban Pakistan (TTP) claimed responsibility for the attack.