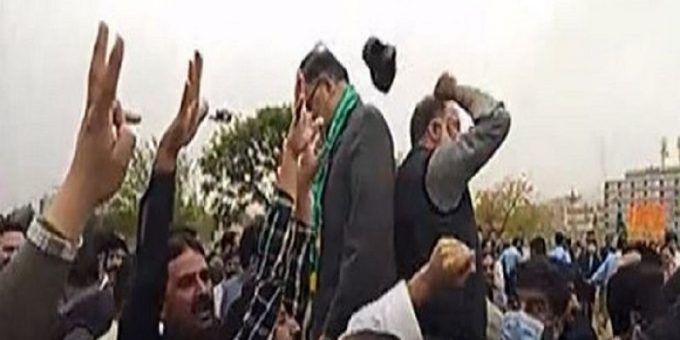 The PTI workers have surrounded the PML-N central leaders including Shahid Khaqan Abbasi, Musadik Malik, Marriyum Aurangzeb, Ahsan Iqbal, Rana Sanaullah and others when they are addressing a press conference outside the Parliament.

The PTI workers holding placards to support Prime Minister Imran Khan and slogans to condemn the corrupt practices of the past rulers were seen standing behind the PML-N workers during the media conference.

Shahid Khaqan Abbasi and Musadik Malik went furious over the interruption in their media talks. Abbasi vented his anger by slapping a PTI worker twice who was standing in front of him. The worker slapped him back, however, the security officials came in and took out Abbasi and Malik from the scene.

Shahid Khaqan Abbasi later came back and criticised that they did not want any security and whoever having the courage to face him should come forward. He said that political worker doesn’t abuse anyone and prefers to respond to opponents in the election.

He alleged that the ongoing session of the National Assembly was unconstitutional and illegal. He blamed the president, prime minister and speaker NA for the tensed situation outside the parliament.

A large number of security officials deployed on the scene to bring the tense situation under control.

Prime Minister Imran Khan will seek a vote of confidence in the National Assembly (NA) today.

According to sources, the ruling coalition has 181 votes in the 341 members National Assembly while the opposition alliance has 160 votes. The Prime Minister will have to get 171 votes.

England vs New Zealand: Jofra Archer Ruled Out Of Series With Elbow Injury
2021-05-16

Paritosh Tripathi on Bigg Boss 13 comedy club: Contestants were sporting to take jokes on themselves
2020-01-10

Temperatures Tumble To Minus-60 Degrees, But Warmest Year Record Still On Track
2019-12-28