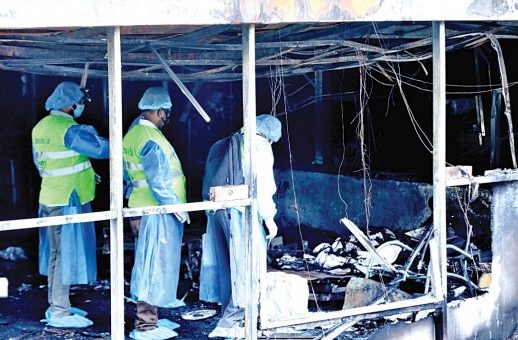 The Supreme Court today stayed till August 16 a High Court order that asked United Hospital authorities to pay Tk 30 lakh as initial payment to the families of the four victims, who were killed in a fire at its isolation unit on May 27.

Chamber Judge of the Appellate Division of the SC Justice Md Nuruzzaman passed the order after virtually hearing a petition filed by the United Hospital authorities, seeking a stay on the HC directive.

The apex court judge also sent the stay petition to the full bench of the Appellate Division for its hearing on August 16.

Barrister Kazi Ershadul Alam, a lawyer for the United Hospital, told The Daily Star that his client need not pay the money to the four families till further order of the SC.

The SC stayed the HC order on grounds that the HC issued the directives for payment without issuing any rule and giving any opportunity to the United Hospital authorities to place their explanation, he added.

Following five separate writ petitions, the HC on July 15 directed the United Hospital authorities to pay Tk 30 lakh to each of the four victims’ families.

The hospital authorities had been directed to pay the money as an initial payment in 15 days of receiving the HC ordercopy.

The United Hospital authorities filed a petition with the SC on July 20, seeking a stay on the HC directive.

Niaz Mohammad Mahboob, who moved one of the writ petitions, told The Daily Star on July 15 that the family of Monir Hossain, one of the five victims who were killed in the fire, had already been paid Tk 20 lakh as an initial payment by the hospital as a compromise.

Some Employees Died Of COVID-19, Their Families To Be Compensated