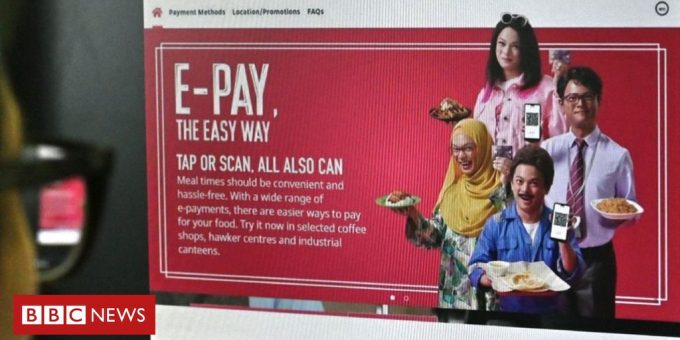 The video was created by Preeti Nair – known as Preetipls on YouTube – and her brother Subhas Nair, a local rapper.

It was a response to a much criticised ad featuring an ethnically Chinese actor in “brownface” and a hijab.

In the expletive-laden rap, the siblings take on the subject of race, highly sensitive in Singapore.

Law and home minister K Shanmugam confirmed that the government had asked the sites to take the rap video down.

He also said earlier this week that the siblings’ video was being investigated by the police.

In a statement sent to the BBC, a Facebook spokesperson said: “Our Community Standards outline what is and isn’t allowed on Facebook and we remove content that violates these standards when we become aware of it.

“There are also times when we may have to restrict access to content because it violates a law in a particular country, even though it doesn’t violate our community standards.”

The ad that set this row off was for a Singaporean e-payments company called Nets, featuring the actor Dennis Chew.

Mr Chew, who is ethnically Chinese, was dressed up as four different characters – including an Indian man and a Malay woman. For this, his face was darkened with make up and he posed in a hijab.

The ad sparked a debate about racism in the wealthy city-state, where 76% of the population is ethnically Chinese, 15% is Malay and 8% is Indian.

It also inspired a lot of jokes online, with one person comparing it to Scarlett Johansson playing an Asian character in a 2017 film.

It sparked such a strong backlash that Havas, the agency behind the ad, and Mr Chew’s agency issued a joint apology, and the ads – which were printed – were taken down.

“The message behind this advertising campaign is that e-payment is for everyone,” the agencies said in a statement. “For that reason, Dennis Chew, well-known for his ability to portray multiple characters in a single production in a light-hearted way, was selected as the face of the campaign.

“He appears as characters from different walks of life in Singapore, bringing home the point that everyone can e-pay. We’re sorry for any hurt that was unintentionally caused. Behind the ad is an initiative to provide greater convenience to consumers, merchants and small food businesses.”

Where does rap come into this?

In response to the ad, Preeti and Subhas Nair released a satirical music video called K. Muthusamy – after the name given to the Indian character in the Nets advert.

In that, the siblings rapped that Chinese people are, to paraphrase, “always messing it up” – although they used stronger language.

“Y’all be doing the least but still doing the most, is it the app or the stereotypes you’re trying to promote?” the pair added, with the offending advert behind them. At the end of the video, the two sit in a cafe and discuss previous instances of racism against Indians in Singapore.

Confirming that the government had asked the social media giants to take the video down, Mr Shanmugam said he feared that if they didn’t get it removed, they would “have to allow” other, similar videos to stay up.

“Let’s say a Chinese now does a video attacking Indians, Malays using four-letter words, vulgar gestures, same kind of videos,” he told Channel News Asia. “And let’s say there are hundreds of thousands of such videos. How do you think the Indians and the Malays will feel? Would people feel safe? Would the minorities feel safe?”

‘Yearning for a franker conversation about race’

Race has always been an ultra-sensitive subject in multi-cultural Singapore, ruled for decades by a government that fears instability and a repeat of past racial violence

Over the years it has imposed strict laws which it says ensure responsible discussion of subjects like race – many in conservative Singapore would agree with that approach – but which critics say restrict freedom of speech and expression.

The country is no stranger to satire, but the liberal use of swear words in K. Muthusamy, and its sharp, direct and caustic tone in discussing racial discrimination, is unusual and would be considered shocking to mainstream Singapore.

But a small and growing number of Singaporeans – many of them young, voracious consumers of online content that has a similar tone to the video – see nothing wrong with it.

This is a group that yearns for a franker and bolder conversation about race, and is frustrated with the careful tones of the discourse in the tightly-controlled local media. They are not content with how mainstream society and the government get to impose a certain definition of racism, and rules on how Singapore should discuss race.

The decision to censor the video and investigate Preetipls and Subhas, coupled with a perception that those who came up with the “brownface” advertisement got off lightly, may only stoke that frustration.

Have the rappers responded?

Yes, on Friday they issued a joint apology – sort of.

In a Facebook post, the pair wrote: “The message behind this music video is that opportunities must be for everyone. For that reason, K Muthusamy, well-known for his ability to address privilege, power and censorship in a single production in a light-hearted way, was selected as the face of this music video.

“He speaks to characters from all walks of life in Singapore, bringing home the point that only some people truly pay. We’re sorry for any hurt that was unintentionally caused. Behind the music video is an initiative to provide greater consciousness to consumers, corporations, and the many faces of Singapore.”

If that looks familiar, it’s because it’s an almost word-for-word parody of the apology released by the ad agency – which is being hailed as “clever” by their followers online.

The best walking workouts for most effective results
2020-04-29