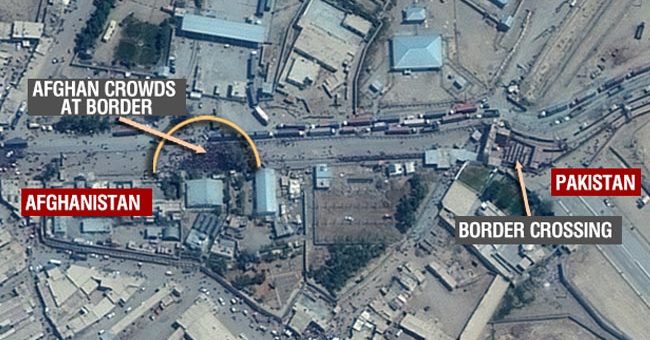 Images from September 6 show massive crowds less than a week ago on the Afghanistan side (high res: here)

While images of desperate Afghan nationals trying to flee their country from Kabul International airport have dominated news, little has been known about the ground situation at Afghanistan’s borders with Pakistan, Iran, Uzbekistan and Tajikistan. Satellite images exclusive to NDTV show thousands stranded at Afghanistan’s border with Pakistan just last week, desperately trying to leave.

The images focus on the ground situation at the Chaman border in Spin Boldak between Afghanistan and Pakistan, and clearly indicate a desperate rush to leave the country.

The Chaman border at Spin Boldak features one of the busiest crossings between Afghanistan and Pakistan. Traffic from Afghanistan has spiked over the past few weeks as families with bags, belongings and children, who have abandoned their homes in Kabul and other cities, wait at makeshift camps for their turn to cross over.

The Chaman border at Spin Boldak features one of the busiest crossings between Afghanistan and Pakistan. Click here for high res image

The images, recorded on September 6, show massive crowds less than a week ago at this site, on the Afghanistan side. Pakistan closed down the Chaman border post recently.

The images match ground reports of thousands of Afghan nationals looking to escape Afghanistan and what they fear is the return of oppressive Taliban rule.

Afghans have been leaving the country by the droves since the Taliban’s takeover last month. Though the hardline group has claimed more moderate policies this time, compared to their brutal regime 20 years ago, their claims on protecting women’s rights have proved to be vastly different from ground realities.

With inputs from @detresfa_