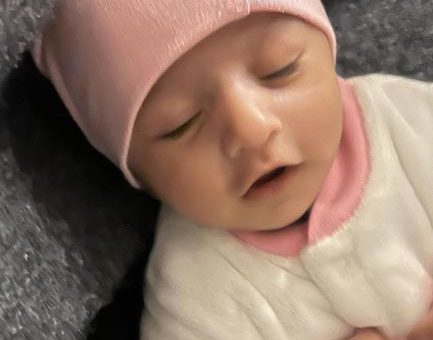 The leading actor of Pakistan, Sarah Khan has left fans in awe with the latest picture of daughter Alyana on Instagram.

One of the most prominent names of the Pakistani drama industry, Sarah Khan took to photo and video sharing application, Instagram to treat her followers with the latest pictures of her only daughter.

Adorable picture of her three-month-old daughter that was shared in the later hours of Friday by the actor has left fans gushing over the innocent child and managed close to half a million hearts in merely a few hours.

The adorable picture which sees Alyana in a cosy pink and white outfit was captioned with “Masha Allah” and some pink hearts.

The ‘Naraz’ actor who is quite frequent on her social media, often shares endearing snippets of her daughter with her millions of followers.

Earlier this week, the talented actor uploaded another video of her daughter with husband, singer Falak Shabir as he held close their child. “I feel safe in babas arms”, the ‘Mumkin’ actor wrote in the caption as she tagged the singer on her video that sees Falak trying to put Alyana to sleep.

Sarah Khan tied the knot with singer Falak Shabir last year and her family grew earlier this year, as the couple was blessed with a daughter, Alyana in October.

The Singer-Actor duo made the joyous announcement on their official Instagram accounts.

Coronavirus: What happening in Canada and around the world on Sunday

#NewRestaurantAlert: Together At 12th: Serving Fab Food & Drinks With A Dollop Of Togetherness
2019-03-18

Ruswai Last Episode: What We Can Expect from the Sana Javed’s Show Finale
2020-04-08