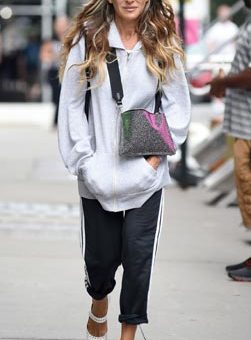 Sarah Jessica Parker couldn’t help but wonder…why people are commenting on her appearance.

The Sex and the City actress, who is once again stepping into Carrie Bradshaw’s fabulous shoes for the upcoming revival series and Just Like That, recently opened up to Vogue about the “misogynist chatter” surrounding her looks.

During an interview with the publication for its December 2021 issue, which features her on the cover, Sarah talked about the criticism she’s seen online about the franchise’s female characters following the announcement about the show.

“There’s so much misogynist chatter in response to us that would never. Happen. About. A. Man,” the actress told Vogue, emphasizing each word. “‘Grey hair grey hair grey hair. Does she have grey hair?’ I’m sitting with Andy Cohen, and he has a full head of grey hair, and he’s exquisite. Why is it okay for him? I don’t know what to tell you people!”

As she put it, “Everyone has something to say. ‘She has too many wrinkles, she doesn’t have enough wrinkles.’”

“It almost feels as if people don’t want us to be perfectly okay with where we are,” Sarah continued, “as if they almost enjoy us being pained by who we are today, whether we choose to age naturally and not look perfect, or whether you do something if that makes you feel better. I know what I look like. I have no choice. What am I going to do about it? Stop aging? Disappear?”

And Just Like That’s showrunner Michael Patrick King, who was a producer and writer for SATC, echoed similar sentiments as Sarah.

“When we announced and Just Like That, there were a lot of positive reactions, but one bitchy response online was people sharing pictures of the Golden Girls,” he told Vogue. “And I was like, ‘Wow, so it’s either you’re 35, or you’re retired and living in Florida. There’s a missing chapter here.’”

Cynthia Nixon, who is once again playing Miranda Hobbes, pointed out, “I like that we’re not trying to youthify the show. We’re not including, like, a 21-year-old niece.”

The show’s writer, Samantha Irby, added, “I think it’s revolutionary to do a show about middle-aged women, with their aging lady bodies.” Come next month, And Just Like That will premiere on HBO Max.

President has power to dissolve parliament from midnight
2020-03-02