Breaking News
2021-12-05 HC questions inaction to inquire into threat of Pegasus software 2021-12-05 Andrey Rublev Puts Russia On Verge Of Davis Cup Triumph 2021-12-05 ‘Chandigarh Kare Aashiqui’ promotions: Vaani Kapoor slays in yet another gown 2021-12-05 Sara Ali Khan Is Having A Great Time In Delhi. Heres What She Ate 2021-12-05 Five love letters from books that will pierce your heart 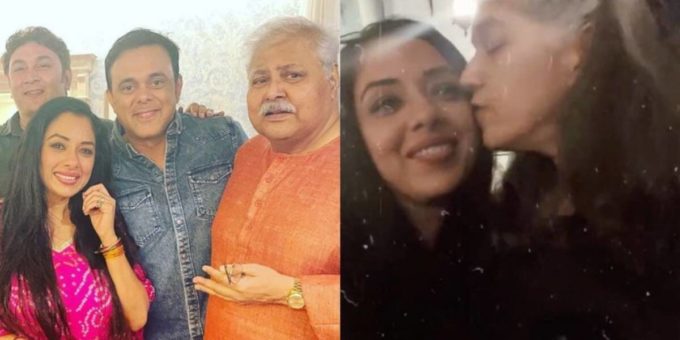 The cast of the iconic sitcom Sarabhai vs Sarabhai had a reunion on Wednesday. Rupali Ganguly, who played the role of Monisha, shared a photo on her Instagram account, featuring Satish Shah, Sumeet Raghavan, Rajesh Kumar as well as the director Aatish Kapadia. She also posted a video, where she introduced everyone to Ratna Pathak Shah, who played her mother-in-law Maya on the show.  The video featured Deven Bhojani, who was Dushyant on the show.

Rupali, who is now acting in the series Anupamaa, captioned her photo, “I love them. More pics coming up!” She also conducted a quick live session, where she introduced her ‘most favouritest family, the most precious family’. Satish Shah hugged her and said, “I love her.” “Mummy say hi”, she old Ratna, who asks to whom? She gets a kiss in return. Rajesh Kumar did his trademark ‘whoopee’, which he used to do constantly as Rosesh from the show.

Rupali also introduced her fans to the better halves of the cast, including Rajesh Kumar’s wife, Madhvi Chopra. She mentioned that she was so excited to meet them all, after so many years. Fans were overjoyed and commented on the video, asking whether the show would return for a season 3. Others wrote that they have been watching Sarabhai vs Sarabhai after ‘binging on Anupamaa’. Rajesh also shared a video where the entire cast sings Sarabhai vs Sarabhai’s title song.

Sarabhai vs Sarabhai chronicled the adventures of Maya and Indravardhan Sarabhai, and their sons Rosesh, Sahil, who is married to Monisha, a girl too ‘middle-class’ for his mother’s tastes. The show focussed on the constant hilarious battles between Maya and Monisha. The series returned for a short season in 2017, but it was no match for the original series in 2006.