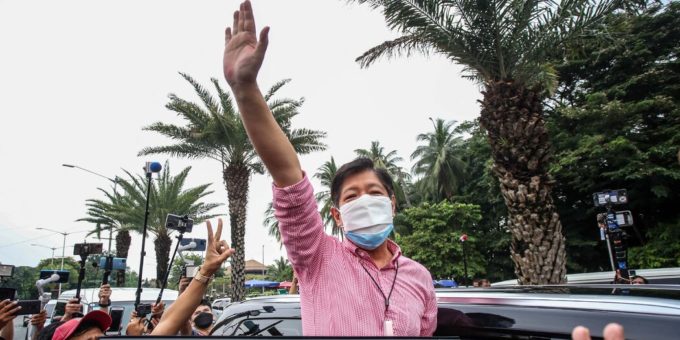 Ferdinand Marcos Jr., the son of the former dictator of the Philippines, claimed a major boost on Saturday in his effort to become the country’s next president, saying that the daughter of its current leader, Rodrigo Duterte, would effectively be his running mate.

Sara Duterte, Mr. Duterte’s daughter, had yet to confirm that she was supporting Mr. Marcos in the May election. But she declared her candidacy for the vice presidency on Saturday, after much speculation that she would run for president herself.

A union of Mr. Marcos, whose family draws its strength from the north, and Ms. Duterte, whose base is in the south, would combine the power of two major political dynasties in the Philippines, posing a steep challenge to the other candidates in a crowded race. Presidents and vice presidents are elected separately in the Philippines, but it is common for candidates to join forces as de facto running mates.

“The real tectonic shift in Philippine politics is essentially back to the future — the clawing back to power systematically and successfully by the Marcoses,” said Richard Heydarian, a political scientist at the Polytechnic University of the Philippines in Manila, who has written a book on Mr. Duterte.

“This is how relevant the latest development is,” he said. “The Dutertes may just have been the curtain raiser for the Marcoses. And my God, that says a lot about Philippine democracy and how troubled it has been in recent years.”

The election comes at a crucial time, with the country facing significant challenges in both foreign and domestic policy. The Philippines is the oldest ally of the United States in Asia and an anchor of the U.S. presence in the region, where Washington is trying to contest China’s spreading influence. At home, the country of roughly 110 million people is facing high unemployment because of the coronavirus pandemic.

As vice president, Ms. Duterte would be well positioned to defend her father from the potential consequences of his bloody and heavily criticized war on drugs, which is being investigated by the International Criminal Court. The court has said that Mr. Duterte’s government appeared to have started “a widespread and systematic attack against the civilian population” and that the killings may have been crimes against humanity.

The national police say its officers have killed at least 8,000 people accused of drug-related crimes, but rights groups say the real number is far higher and that many of those killed were innocent.

Ms. Duterte, 43, was the favorite for the May presidential race in a field of 97 candidates, including Mr. Marcos, the former boxing star Manny Pacquiao and the country’s vice president. But several political pundits had predicted that Ms. Duterte would not run against Mr. Marcos because they draw support from many of the same voters.

“They will restore the faith of the people in the government, which was ruined by Imelda,” said Reynaldo Dasig, 57, a parking attendant in Dagupan City, referring to Mr. Marcos’s mother, Imelda R. Marcos, who was found guilty of corruption in 2018 but has eluded jail time.

“I think he won’t do an Imelda, and if he wins, he may give back to the country what his mother stole,” he said, adding of Mr. Marcos and Ms. Duterte, “I will vote for the two of them, whoever is the president or vice president.”

Rights activists have described the election as an existential moment for the country’s democracy, which they say has backslid under Mr. Duterte. His administration has jailed opponents and tried to intimidate journalists who criticize him, most notably Maria Ressa, one of two recipients of this year’s Nobel Peace Prize.

“Human rights is going to become an issue in the campaign in ways that we haven’t seen since the Marcos dictatorship,” said Carlos Conde, a senior researcher at Human Rights Watch who covers the Philippines. “Regardless of what the Marcoses are saying — that they have become popular and all of that — I think the sordid Marcos legacy is still a handicap.”

Mr. Marcos’s father, Ferdinand E. Marcos, ruled the Philippines with an iron fist for two decades. He was defeated by a popular uprising in 1986 and went into exile in Hawaii, where he died three years later. He was accused of stealing up to $10 billion from state coffers and leaving thousands of activists dead or missing.

His widow, Imelda Marcos, now 92, and children were later allowed to return to the Philippines, where they worked to rehabilitate the family name. Mr. Marcos, 64, their only son, who is widely known in the Philippines as “Bongbong,” served as a governor and a senator. His sister Imee is a senator.

Mr. Duterte aligned himself with the Marcos family early on, publicly thanking them for bankrolling his candidacy in the 2016 presidential election. Just months into office, he allowed the dictator’s remains to be transferred to the Philippines’ equivalent of Arlington National Cemetery, in Manila.

The Marcoses have also been able to capitalize on other factors. Younger Filipinos are largely unaware of the abuses of the Marcos era, which are given short shrift in the country’s textbooks. And later administrations are widely seen as having done little to improve the lives of ordinary people.

Supporters of the Marcos family often trumpet the dictator’s time in power as a golden age of politics, or say that children should not bear the sins of the father.

“I’m not going to blame them for what happened during those years, they were not part of the policy of their father,” said Herman Joseph Kraft, the chairman of the political science department at the University of the Philippines. “However, I can blame them for actually trying to revise history, to change the narrative of those times and try to promote the notion that their father was a hero.”

Mr. Marcos has repeatedly said that he would not apologize for what his father did. In 2016, when Mr. Duterte allowed his father’s remains to be interred in the national cemetery of heroes, he told reporters that he could “only apologize for myself.”

In another interview with local news media that year, Mr. Marcos said: “No matter what apologies you give, it won’t be enough.”

Colonel, His Wife And Son Among 7 Dead In Ambush By Terrorists In Manipur

US politicians condemn Houthi breach of US Embassy in Yemen

Attention! Do your cosmetics have this dangerous bacterium?
2020-09-14