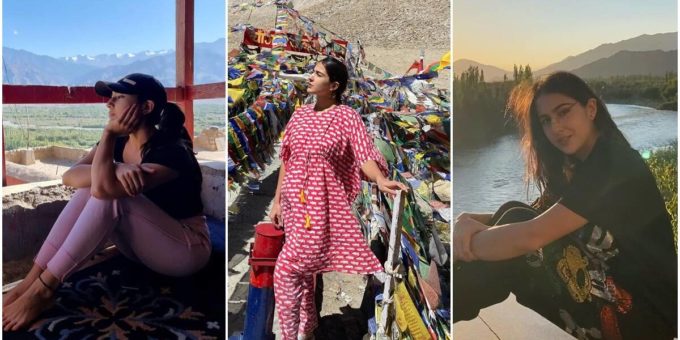 The pandemic that has been raging since early last year has made sure most of us stay at home. However, some have braved the dangers to visit tourist places to find some respite from the daily grind. Sara Ali Khan is one of them.

Sara is currently on a quiet sojourn to Ladakh. She has been sharing pictures of the breathtaking locations on her Instagram profile.

Ladakh is mostly a mountain desert and is known for its sparse, stunning beauty. It is also home to many beautiful Buddhist temples that are considered marvels of architecture. You can see the photos below.

It is safe to say the pictures will make you want to escape to the mountains as soon as possible.

On the work front, Sara Ali Khan was last seen in Coolie No. 1, the remake of David Dhawan’s 1995 comedy film of the same name.

Her next project is Aanand L. Rai’s Atrangi Re. Talking about working with the filmmaker, Sara said, “Aanand ji is known for telling great stories with very strong women, and I really hope that this can follow the same trend. I hope that we have been able to do together what he has so successfully done many times without me.”

The actor also spoke about her experience of sharing screen space with Akshay Kumar and Dhanush. She said, “There was a running joke on set where I used to call Dhanush ‘thalaiva’ and I used to call Akshay sir ‘thalaiva of the north’. It was just between these two thalaivas that I have tried to do some work and I hope all of our combined effort is appreciated.”

Among the Troops WhoDied, Two Women on the Frontline

Tandoori Recipes: 5 Delish Tandoori Snacks You Must Include In Your Party Menu
2019-10-10