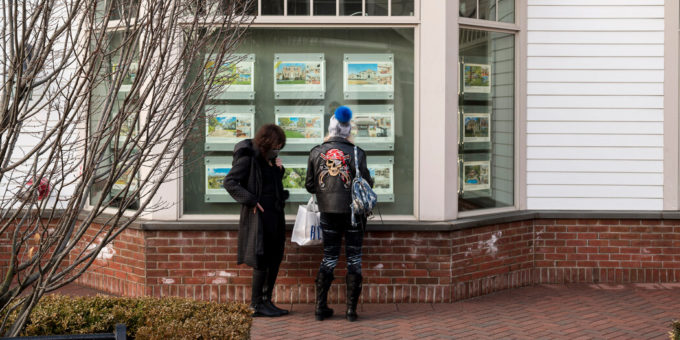 Here’s what you need to know:

Soaring prices and a shortage of available homes are starting to hold back the blazing U.S. housing market.

Sales of existing homes fell 2.7 percent in April, the National Association of Realtors said Friday. It was the third straight monthly decline after a surge in transactions earlier in the pandemic.

Mortgage rates have crept up since the start of the year, which has likely put a crimp in demand. But the main force holding back sales isn’t a lack of willing buyers. It is a lack of homes for them to buy — especially at prices they can afford.

The median sales price of an existing home was $341,600 in April, up 19.1 percent from a year earlier. Both the price and the increase were record highs. The number of homes on the market rose in April but was down 20.5 percent from a year ago and remained close to a record low.

As a result, competition for homes can be intense. The Realtors said that 88 percent of homes sold in April were on the market for less than a month. A quarter of buyers paid cash. At Redfin, the online brokerage, half of all homes sold in recent weeks have gone for more than their asking price, up from about a quarter a year ago.

“Even if demand comes down, supply is the issue, and until we see more homes come on the market, that’s going to limit sales,” said Glenn Kelman, Redfin’s chief executive. “When you meet a new buyer you almost say, ‘Good luck.’”

The increase in remote work during the pandemic has led to an increase in demand for homes, particularly outside of city centers. That demand has remained as the economy has begun to reopen, even as millions of millennials are reaching the age when Americans have historically looked to buy homes. But the combination of high prices and limited inventories is making it especially hard for young people to get into the housing market.

“First-time buyers in particular are having trouble securing that first home for a multitude of reasons, including not enough affordable properties, competition with cash buyers and properties leaving the market at such a rapid pace,” Lawrence Yun, chief economist for the National Association of Realtors, said in a statement.

Stocks on Wall Street rose on Friday along with most European markets as data showed more evidence of the European economy strengthening as it emerges from lockdowns and vaccines are rolled out faster.

The S&P 500 was slightly higher at midday, a day after better-than-expected data on unemployment claims helped calm a market unsettled by concerns that inflation could rise faster than anticipated. Data released Friday on manufacturing activity in the United States and Europe showed a rapid pickup, as did retail sales data from Britain.

The Stoxx Europe 600 rose 0.6 percent led by gains in consumer companies. One of the biggest gainers was Richemont, the Swiss luxury goods company that owns brands including Cartier and Montblanc. Richemont shares rose after the company reported its full-year results with strong growth in sales in Asia especially for its jewelry and watch brands.

There are many ways to measure how much the economy has reopened after pandemic lockdowns. One offbeat way is to compare the share prices of Clorox to Dave & Buster’s.

Nick Mazing, the director of research at the data provider Sentieo, came up with this metric to gauge shifts in postpandemic activity. The higher Clorox’s share price rises relative to Dave & Buster’s, the more people appear to be staying home and disinfecting everything than going out to crowded bars.

By this measure, the DealBook newsletter reports, conditions have nearly returned to prepandemic levels — indeed, Dave & Buster’s recently lifted its sales forecast, as nearly all of its beer-and-arcade bars have reopened.

The first is also nearly back to where it was before the pandemic: Live Nation is preparing for a packed concert schedule, selling tickets to people who may have already binge-watched all of “Below Deck.”

The second, however, suggests that people aren’t as eager to get back to huffing and puffing at the gym as they are content to exercise at home. As restrictions lift and people feel safer in crowds, drinking and dancing appear to be higher priorities.

The government’s $788 billion relief effort for small businesses ravaged by the coronavirus pandemic, the Paycheck Protection Program, is ending as it began, with the initiative’s final days mired in chaos and confusion.

Millions of applicants are seeking money from the scant handful of lenders still making the government-backed loans. Hundreds of thousands of people are stuck in limbo, waiting to find out if they will receive their approved loans — some of which have been stalled for months because of errors or glitches. Lenders are overwhelmed, and borrowers are panicking, The New York Times’s Stacy Cowley reports.

The relief program had been scheduled to keep taking applications until May 31. But two weeks ago, its manager, the Small Business Administration, announced that the program’s $292 billion in financing for forgivable loans this year had nearly run out and that it would immediately stop processing most new applications.

Then the government threw another curveball: The Small Business Administration decided that the remaining money, around $9 billion, would be available only through community financial institutions, a small group of specially designated institutions that focus on underserved communities.

The American steel industry is experiencing a comeback that few would have predicted even months ago.

Steel prices are at record highs and demand is surging as businesses step up production amid an easing of pandemic restrictions. Steel makers have consolidated in the past year, allowing them to exert more control over supply. Tariffs on foreign steel imposed by the Trump administration have kept cheaper imports out. And steel companies are hiring again, The New York Times’s Matt Phillips reports.

It’s not clear how long the boom will last. This week, the Biden administration began discussions with European Union trade officials about global steel markets. Some steel workers and executives believe that could lead to an eventual pullback of the Trump-era tariffs, which are widely credited for spurring the turnaround in the steel industry.

Record prices for steel are not going to reverse decades of job losses. Since the early 1960s, employment in the steel industry has fallen more than 75 percent. More than 400,000 jobs disappeared as foreign competition grew and as the industry shifted toward production processes that required fewer workers. But the price surge is delivering some optimism to steel towns across the country, especially after job losses during the pandemic pushed American steel employment to the lowest level on record.

Friends The Reunion: Friendships and family that came out of it, can’t be put in words, says Jennifer Aniston