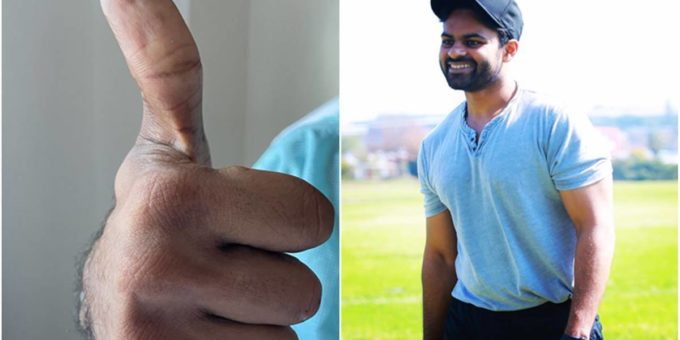 Actor Sai Dharam Tej on Sunday made his first Twitter post after the bike accident in September. The actor, who is currently hospitalised, was in a coma for a long time. His uncle Pawan Kalyan had stated during the pre-release event of his film Republic that the actor is still unconscious. However, Sai’s tweet on Sunday saw fans breathe a sigh of relief.

Thanks is a small word to express my gratitude for your love and affection on me and my movie “Republic “
See you soon pic.twitter.com/0PvIyovZn3

The tweet has come two days after the theatrical release of his film Republic. In the tweet, Sai Dharam Tej thanked his fans for their love and support to him and his film. He also made a gesture that signalled that he is doing fine.

“Thanks is a small word to express my gratitude for your love and affection on me and my movie Republic. See you soon,” he wrote along with a picture in which the actor is seen making a thumbs-up gesture while keeping his face hidden. Sai’s tweet has come hours after Pawan Kalyan and Chiranjeevi sent appreciation letters and flowers to the actor.

Sai Dharam Tej met with a bike accident in September in Hyderabad. The actor, who was admitted to Medicare Hospital, was later shifted to Jubilee Hills Apollo Hospital for treatment.

Meanwhile, Sai Dharam Tej’s Republic is getting a great response from the audience as well as his contemporaries. “Watched Republic. For all the kindness @IamSaiDharamTej has shown towards everyone around him it has come back in the form of your prayers and it’s coming back stronger in the form of #REPUBLIC. This is @devakatta ‘s announcement that he is back. Congratulations to the team,” Nani wrote on Twitter. Allu Arjun, Chiranjeevi and others urged fans to watch the film in theatres. “Grand release of the movie #Republic today. It’s very unfortunate that my brother @IamSaiDharamTej is not there to witness it. Wishing that the fans & public show their love & support to this film. Best wishes @devakatta, @aishu_dil @meramyakrishnan & the entire team,” Allu Arjun tweeted.

Ahead of the release, Chiranjeevi posted on Twittter, “Sai Dharam Tej is recovering very well.” He added that he hopes that fans enjoy Republic and the film’s success will make way for many more theatrical releases in the future.

Egypt affirms its continued support for all efforts to stabilize Libya

Good sleep versus good workout: What is more important for weight loss?
2019-05-26

Whistleblower Haris Khan Says BoisLockerRoom Not The Only One, Couldn’t Keep Silent
2020-05-07