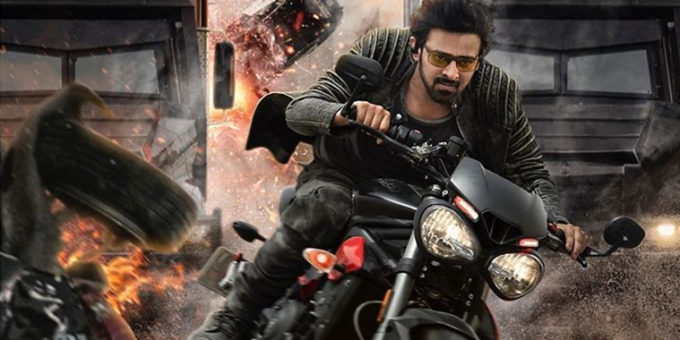 Saaho is an out-and-out action film. It seems like the movie is made to lure a global audience and hence it features some fantastic, international level action sequences directed by various action directors, including the legendary Hollywood stunt choreographer Kenny Bates.

We watched the teaser of Saaho at a preview in Mumbai. It is more about introducing the star cast and showcasing the heroism and raw machismo of Prabhas, than revealing the story.

Here are some highlights of the Saaho teaser:

The action is seamless, but a little too much for the one minute and forty seconds teaser. You get a taste of the ample car chasing and bike riding sequences featuring Prabhas. It will be a spectacular vision on screen. Saaho promises to be a gripping, OTT action thriller.

As we said earlier, this film is a showcase for the machismo of Telugu superstar Prabhas. Set aside Prabhas from Baahubali and prepare yourself to see him in a more superhero type avatar. Prabhas doing the bike riding sequences is totally satiating. You will also see him trying his hand at comedy.

The teaser is more like an introduction to the star cast of Saaho. It has some popular actors from Telugu and Hindi film industries. You see many known faces from Bollywood which gives this movie a pan India connect. While Shraddha Kapoor romances Prabhas in the film, Neil Nitin Mukesh is the main antagonist. Saaho also stars Arun Vijay, Chunky Pandey, Jackie Shroff, Mahesh Manjrekar, Mandira Bedi, Evylin Sharma and Vennela Kishore.

The teaser gives a sneak peek at the smooth and rich visual effects in Saaho. The aerial shots and fight sequences in international cities are thrilling. But then you might also wonder why is there so much VFX in the movie? There is a scene where someone moves a glass filled with ice cubes and it also features VFX. However, the scene doesn’t look bad either. VFX is the backbone of Saaho.

Saaho is not dubbed. It is shot in three different languages – Telugu, Tamil and Hindi, simultaneously. This helps the pan-India audience to connect with the film. With Prabhas’ massive fan following all over India after his performance in Baahubali movies, this movie will show him in a different avatar and an equally meaty role.

The teaser of Saaho releases online tomorrow and the trailer will be launched soon. The movie releases on August 15, 2019.

Gaza parents struggle to join kids for treatment in Israel

Girl Pregnant After Being Raped By Friend In Delhi