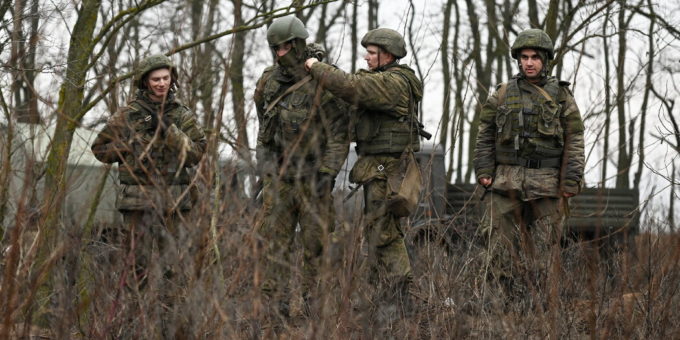 KYIV, Ukraine — Russia outlined on Friday its demands for a sweeping new security arrangement with the West in Eastern Europe, with the most far-reaching request a written guarantee that NATO will not expand farther east toward Russia and will end all military activity in Ukraine and elsewhere in Eastern Europe, Central Asia and the Caucasus.

The Russians also said they wanted NATO to remove all military infrastructure installed in Eastern Europe after 1997 — demands that analysts said seemed unacceptable to the West.

Russia’s deputy foreign minister, Sergey A. Ryabkov, offered the details about the proposal in public for the first time on Friday, in a video news conference in Moscow, amid a Russian troop buildup near Ukraine’s border.

The demands went far beyond the current conflict between Ukrainian government forces and Russia-backed separatists in eastern Ukraine. And most were directed not at Ukraine, which is threatened by the troop buildup, but at the United States and Ukraine’s other Western allies.

They included a request for a NATO commitment that it would not offer membership to Ukraine specifically. But NATO countries are unlikely to formally rule out future membership for Eastern European countries.

The proposal highlighted starkly differing views in the United States and Russia on the military tensions over Ukraine. Russia has insisted that the West has been fomenting the crisis by instilling anti-Russia sentiment in Ukraine, and by providing weapons. Mr. Ryabkov cast the confrontation in Ukraine as a critical threat to Russia’s security.

The United States and European allies, in contrast, say Russia provoked the security crisis by recently deploying tens of thousands of troops near Ukraine’s border.

President Vladimir V. Putin of Russia voiced some of the demands more broadly in recent weeks. But this formal Russian offer on Friday for defusing the tensions on Ukraine’s border followed a video call between President Biden and Mr. Putin on Dec. 7. After the call, Mr. Biden said he was willing to hear the Russians out.

Russian officials said diplomats conveyed the proposal to a senior American diplomat, the State Department’s assistant secretary of state for European and Eurasian affairs, on Wednesday during meetings in Moscow. Afterward, Ms. Donfried said in a video statement that she would relay the ideas to Washington as well as to NATO allies during a stop this week in Brussels.

The Russian Foreign Ministry had said in a statement last week that Moscow was seeking a document with “legal and obligatory character” prohibiting any further expansion of NATO eastward in Europe. The Russian proposal took the form of a draft statement from NATO.

“Member states of the North Atlantic Treaty Organization accept the obligation to exclude farther expansion of NATO to Ukraine and other states,” the text suggested as an acceptable guarantee for Russia.

The demand is directly at odds with NATO’s stated “open door” policy, reiterated just this week. The NATO chief met with Ukraine’s president on Thursday and signaled the Western military alliance’s support by echoing an earlier promise to provide Ukraine with a path to NATO membership. However, NATO did not pledge the weaponry and other critical military support that Ukraine had been seeking to deter or counter a possible Russian incursion.

In demanding the written guarantee from NATO, Russian officials including Mr. Putin have reached into early post-Cold War history, describing what they see as a betrayal by the West in 1990.

They assert that NATO expanded to the east in following years despite a spoken assurance from James Baker, then the secretary of state, to the Soviet leader, Mikhail S. Gorbachev, that it would not.

The agreement was never put in writing and Mr. Baker said later that Russian officials misinterpreted his comment, which applied only to the territory of the former East Germany. Mr. Gorbachev has, in interviews, confirmed that spoken assurance came in discussions only of East Germany.

The new Russian proposal surfaced other historical grievances. It demanded NATO withdraw military infrastructure placed in Eastern European states after 1997, the date of an accord signed between Russia and NATO that Moscow wants now as a starting point of a new security treaty.

Understand the Escalating Tensions Over Ukraine

Ominous warnings. Russia called the strike a destabilizing act that violated the cease-fire agreement, raising fears of a new intervention in Ukraine that could draw the United States and Europe into a new phase of the conflict.

The Kremlin’s position. President Vladimir V. Putin of Russia, who has increasingly portrayed NATO’s eastward expansion as an existential threat to his country, said that Moscow’s military buildup was a response to Ukraine’s deepening partnership with the alliance.

The Russian Foreign Ministry had earlier demanded that NATO officially abrogate a 2008 promise, known as the Budapest declaration, that Ukraine and Georgia would be welcomed into the alliance. The NATO chief invoked that declaration after the meeting with Ukraine’s president, Volodymyr Zelensky, on Thursday, saying the offer still stands.

The ministry has also asked for a commitment from NATO countries not to deploy offensive weapons on states neighboring Russia, including countries not in the alliance, a reference to Ukraine. And the proposal suggested a ban on military exercises at strengths of more than a brigade in a zone along both sides of Russia’s western border, an issue that would address the current military buildup near Ukraine.

The Foreign Ministry has also asked for a resumption of regular military-to-military dialogue with the United States and NATO, which was halted after the Ukraine crisis began in 2014. And it asked the United States to announce a moratorium on deploying short- and medium-range missiles in Europe.

Analysts expressed concerns about the Russian demands, saying they appeared to set up any talks between Russia and the West on these “security guarantees” for failure.

Also, they say, negotiating such wide-ranging new security accommodations would most likely take many months, if it can be accomplished at all. Mr. Putin may have to decide at an earlier moment whether or not to go ahead with an invasion because the troops garrisoned now at temporary sites near the Ukrainian border cannot remain there indefinitely.

Ukrainian officials have suggested that the U.S. withdrawal from Afghanistan in August helped precipitate the crisis by signaling waning American resolve for overseas commitments, which emboldened the Kremlin. The Biden administration has vowed to remain engaged in the international arena and said it intended to repair relationships strained under President Donald J. Trump. American officials have consistently said they are committed to supporting Ukrainian sovereignty.

Mr. Putin has come close to openly acknowledging that he is using military force to coerce the West to negotiate, though his spokesman has denied this. Mr. Putin has said Western countries were realizing Russia was serious about defending “red lines” related to NATO forces near its borders.

“Our recent warnings have indeed been heard and are having a certain effect,” he told a gathering of Russian diplomats in November. “Tensions have risen.”

Hundreds protest in Tunisia on anniversary of revolution