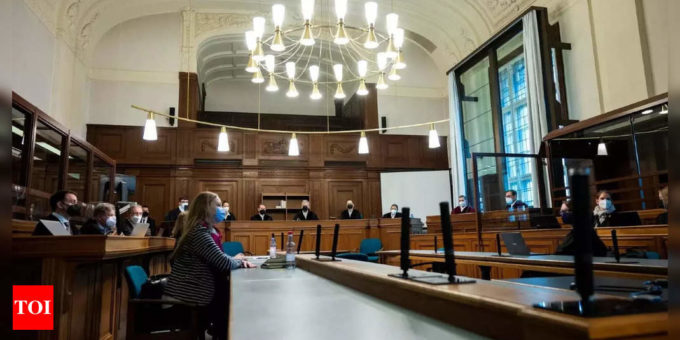 MOSCOW: Moscow on Wednesday condemned as “political” a German court’s ruling that the 2019 assassination of a former Chechen commander in a Berlin park was ordered by Russia.
Earlier Wednesday a Berlin court had sentenced Russian suspect Vadim Krasikov, alias Vadim Sokolov, to life in jail after finding him guilty of gunning down 40-year-old Georgian national Tornike Kavtarashvili in the Kleiner Tiergarten park in broad daylight on August 23, 2019.
The presiding judge in the case said that Russian authorities had ordered Krasikov to “liquidate the victim” and said the murder was meant “as retaliation” for being a Kremlin opponent.
“We consider this verdict to be a biased, politically-motivated decision that seriously aggravates already difficult Russian-German relations,” Russia’s ambassador to Germany, Sergei Nechayev, said in a statement.
He called the notion that Russian authorities ordered the killing “absurd” and said it was “methodically imposed on the public throughout the trial, intertwined with general anti-Russian sentiment.”
Shortly after the murder took place, Germany under then-chancellor Angela Merkel expelled two Russian diplomats in protest at Moscow’s perceived lack of cooperation with the investigation.
Russia, denying any connection to the killing, responded with a tit-for-tat move.
The ruling Wednesday piles pressure on Germany’s new government, which has vowed a tougher stance towards Russia, and comes amid growing alarm in the West about Russian troop movements on the border with Ukraine.

Manipur Woman Who Returned From UK Has Coronavirus, 1st In North-East
2020-03-24