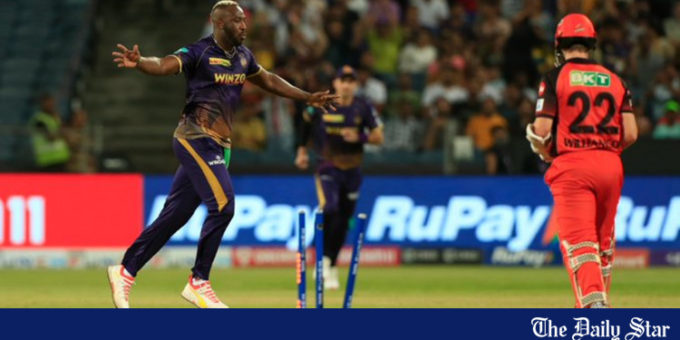 Andre Russell smashed an unbeaten 49 and took three wickets to help Kolkata Knight Riders stay alive in the IPL play-offs race with a big victory over Sunrisers Hyderabad on Saturday.

The West Indies big-hitter steered Kolkata to 177 for six in his 28-ball knock laced with four sixes as he lifted the team from a precarious 94-5 in Pune.

Russell and fellow quick Tim Southee then shared five wickets between them as Kolkata kept down Hyderabad to 123-8 and win by 54 runs.

“The mindset we came up in this game, it was simply outstanding. All the boys did the right things, they played fearless cricket,” skipper Shreyas Iyer said after the win.

“The plan was to give Russell the strike as much as possible. We knew Washi (Washington Sundar) had one over left, that was the over we were going to target.

He added, “We don’t have anything to lose right now. We haven’t played our A-game so far in the league, that’s what I spoke about today before the match started.”

Kolkata jumped to sixth in the 10-team table with their second successive victory. They need to win their final match and then rely on other results to qualify for the final-four.

The 2016 champions Hyderabad went down to their fifth straight loss with two more league games remaining.

Russell’s 3-22 inspired Kolkata in the absence of Australia’s Pat Cummins who has flown back home due to a hip injury.

It was Russell the batsman that set up victory after he put together 63 runs off 44 balls with England’s Sam Billings to take the attack to the opposition.

Hyderabad’s speed demon Umran Malik rattled the Kolkata batting with his twin strikes in one over to send back Nitish Rana, who made 26 off 16, and Ajinkya Rahane, for 28.

In the next over, Malik got Shreyas bowled for 15 but Russell and Billings, a wicketkeeper-batsman, rebuilt the innings and put the pressure back on Hyderabad.

Russell finished off the innings with three sixes in spinner Sundar’s final over — 20th of the innings.

“it’s like a kid in the candy shop. I got full tosses and I put it away,” Russell said of his hits off Sundar.

“Hard work paid off today. Good to contribute in both aspects tonight. I’m just going to keep it going, hopefully we can qualify.”

In reply, Williamson’s dry run with the bat — scored just 208 runs in 12 matches — this IPL extended to another game as he got bowled while attempting the scoop shot off Russell.

Wickets kept tumbling as Southee’s stunning caught and bowled effort to take down a rampaging Abhishek Sharma, for 43, and Aiden Markram out bowled for 32 off Umesh Yadav.

Russell and Southee rattled the Hyderabad middle and lower-order to derail the opposition chase.