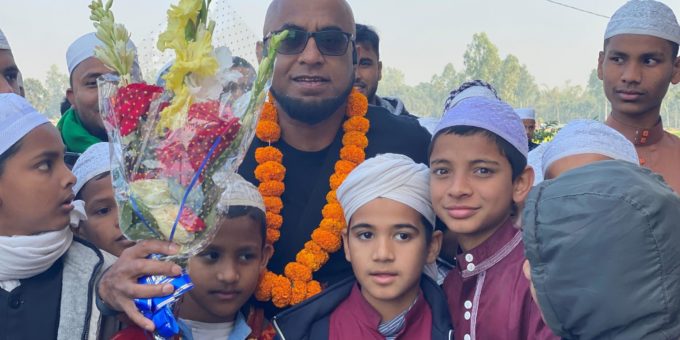 A charity campaigner who has raised almost half a million pounds for charity has been named in the Queen’s new-year list for services to charity fundraising.

Mohammed Afruz Miah, 49, of Oldham started running for charity two years ago after suffering a health scare due to developing hypertension. He has received a BEM (British Empire Medal).

Some of his awe-inspiring feats of endurance include running from Oldham to London while fasting during the Muslim holy month of Ramadan. He also ran half marathons in eight cities over eight days and completed his first London marathon in October.

Afruz said: “To say I’m pleasantly surprised, is an understatement as normally you expect some community, local or even regional recognition before being honoured with a national award, especially the British Empire Medal (BEM).

“As a Liverpool fan, a visit to Anfield to meet the team for tea would have been enough for me but to be awarded a BEM and to be invited to the garden party at Buckingham Palace seems surreal.

“Firstly I would like to show gratitude to Allah (God) who has given me the ability to do my bit for humanity and serve different communities, especially during these testing times.

“Also, I want to thank my family without whom none of this would have been possible. A special mention to my rock, my pillar of support during these unprecedented times, my amazing wife. I also pray for my parents who raised me selflessly.

“I want to thank my JustBreathe family who have supported local schools affected by Covid- 19, various food banks, a local homeless charity, NHS staff, Logan’s children’s heart foundation, setting up physical activities and programs for families struggling with mental health during the pandemic and many more campaigns funded by the community for the community.”

The team at JustBreathe set up running sessions which takes place three times a week, in various locations in Oldham engaging over 50-60 participants, which also includes women-only groups to accommodate the needs of females in the community.

He has carried out campaigns with GRT (Global Relief Trust), who work in various countries including Bangladesh and Yemen. Their affiliation included sky-dives, bake offs, 24hrs walks, mountain climbs and food challenges.

Afruz added: “I hope my story encourages and motivates others to look after their physical and mental health and well-being and I hope this inspires people to do their bit for humanity and the less fortunate locally, nationally and globally as there is so much that needs to be done. “

Some Save on Foods combo meals recalled due to salmonella risk

Fan Recreates Parizaad in Real Life After Getting Inspired from Character